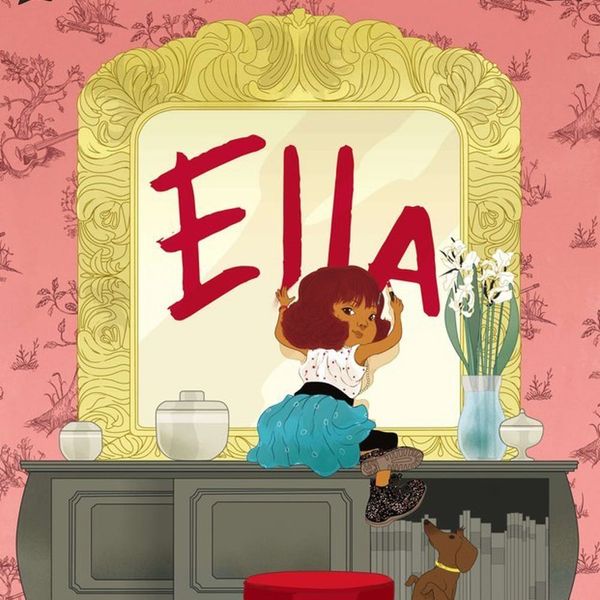 Right up there with Madeline and Ramona Quimby, children’s book star Eloise and her life at the Plaza Hotel is an adorable classic. But if you’re looking for a modern update to that classic (beyond New York Magazine‘s 2013 account of the midtown tot’s move to Brooklyn) then you have to meet Ella. She also lives in a hotel, but she’s hip to tech, fashion and even has a manny. No matter what age you are, she’ll quickly become your new role model… and she hasn’t even cleared elementary school.

You can buy this gorgeous picture book for your kiddos or yourself tomorrow (we’d totally buy it as a coffee table book, no joke). But you don’t have to wait a single second to get acquainted with this modern classic. We interviewed Mallory and Marcos about the inspirations behind Ella.

1. Where did the idea for Ella come from?

It was at my birthday a few summers ago. We were at this groovy hotel in Brooklyn, and I was picturing my daughter, who was six at the time, riding her scooter through the decidedly non-kid-friendly rooftop bar, where everything was just so perfectly Brooklyn-esque, and I realized that if six-year-old Eloise from the Plaza was to show up in 2015 that she would surely be living in this type of super hip spot, bossing people around and having appropriately modern adventures.

2. Other than the hotel setting, are there any other quirks from Eloise that inspired Ella?

Ella hangs out exclusively with adults, so like Eloise, her daily worldview has a sophisticated flavor to it. She repeats things the grownups around her say without knowing quite what they mean and her hobbies and habits reflect her rarified life.

Eloise lives among the hotel archetypes of the 1950s — the formality of ballroom weddings, afternoon tea, of elevator operators and a grand lobby culture. Instead of professional concierges or bellhops or career waiters, the adults in Ella tend more toward the kinds of young hipster writer, actress, bootlegger, entrepreneur types that Brooklyn has become famous for, which I think makes for a fun and contrasting update on the original.

Beyond that of course, Ella and Eloise share an inherent self-confidence, a taste for the finer things in life and that six-year-old enthusiasm that cannot be squashed.

3. Why do you think the world of children’s literature needed Ella?

I live in Brooklyn and love it dearly but at times it all becomes a little precious. We have to laugh at ourselves sometimes otherwise we will slowly go insane. For that reason, parody is a great tool to capture a moment in time. I also think Ella lives in this very visually diverse and culturally rich world, and that’s fun for all kids and adults to see who maybe don’t live in a place like The Local Hotel.

I love that Ella doesn’t know how unusual her life is. She doesn’t know that the wedding she attends between two men is something that wouldn’t have happened in the ’50s. She doesn’t realize that it’s not normal to be “hotel schooled.” It’s just her daily life, and I think it’s fun for readers to imagine how unusual that life actually is in comparison with their own.

4. What characters in children’s books inspired you as a kid?

I still love Max in Where the Wild Things Are. Reading that book with my mom as a little kid remains a visceral experience that I still carry with me.

5. Are any of your own parenting experiences reflected in Ella?

A lot of my daughter’s intonations and catch phrases made their way into the book and some of her frenetic energy, overall scheming and mad scootering. Also, at the end of the book when Ella is trying to get to bed, she looks in the windows of her neighbors as they all prepare for bed with their variety of rituals. Living in NYC, you often can’t help but imagine the lives of people who you only see from across the alleyway. My kids and I talk about that sometimes, how we watch and are watched and that is just a part of life here.

6. What do you think grownups can learn from the book?

We should care less about what others think of us, maintain that six-year old openness and know our rights to demand the WiFi password.

7. Do you predict any future adventures for the character?

Well, Manny is working on his yoga teacher training certification so I’m hoping they get to go to Costa Rica on a yoga retreat like in mid-February. I could also see Ella getting her own reality show – maybe on Bravo.

1. Who was your style inspiration for Ella’s character?

Readers might identity Ella as a “hipster,” and they’re not entirely wrong. My style inspiration when designing her came from my own backyard. The neighborhoods in Toronto and NYC that I’ve lived in have always been on the pulse of art and design.

A lot of the people who choose to live there are creative individuals who care about expressing themselves through their artwork, whether it’s visual, written, music or performance. I travel to and from Manhattan regularly so I’m exposed to fashion on a daily basis. The streets, subways and subway stations become a catwalk. They’re filled with individuals who have inspired Ella’s character in some capacity.

2. Where do you think Ella’s favorite place to buy clothes is?

There’s a great store near where I live (in Brooklyn) called Park Delicatessen. It’s a concept store that’s a blend of a flower shop, skate(board) shop and clothing store; it reads like an art gallery.

3. Your style looks like something that would be in the The New York Times … in fact, it has been. What do you think this brings to the world of Ella?

This is the first children’s book I’ve illustrated and my thought process behind creating Ella‘s world was to build a graphic and colorful environment that was strongly narrative and playful. Some of the details might be missed by children, but I’m hoping they’ll still be able to appreciate and engage with the drawings overall. The details that I’ve inserted such as air plants and stag horn ferns, Manny’s unfinished tattoo, Geta (sandals), a nod to a vintage Vogue cover are meant to be “winks” to some of the adults who might be reading the book with their children. On their own, these details support and give substance to Ella‘s world.

4. What were some of your favorite things to draw in Ella and why?

I enjoyed drawing Ella‘s bedroom because it allowed me to include parts of myself, the things that I love and are surrounded by such as my guitar and coconut plant (I have one at home. She’s five feet tall and named “Coco” after the model Coco Rocha). Stacie, Ella‘s dog was also fun to draw because I referenced my own dog — who’s a chocolate brown dachshund and terrier mix — for her poses and behavior.

You can get hip and buy Ella from Penguin starting January 22.

Know of any other modern day children’s books? Let me us know in the comments below!

Katelan Cunningham
Katelan is a tech junkie obsessing over all things startup and design. She has entirely way too many apps on her phone and is no stranger to binge-watching. She accidentally fell in love in Los Angeles and that’s where she currently lives, writes, tweets and grams.
interview
Parenting
interview meet the maker

Why We Should Take The Time To Give Compliments Every Day

These Ideas Prove Self Care Doesn't Have To Be Expensive