Here’s How to Use Facebook’s Messenger Reactions 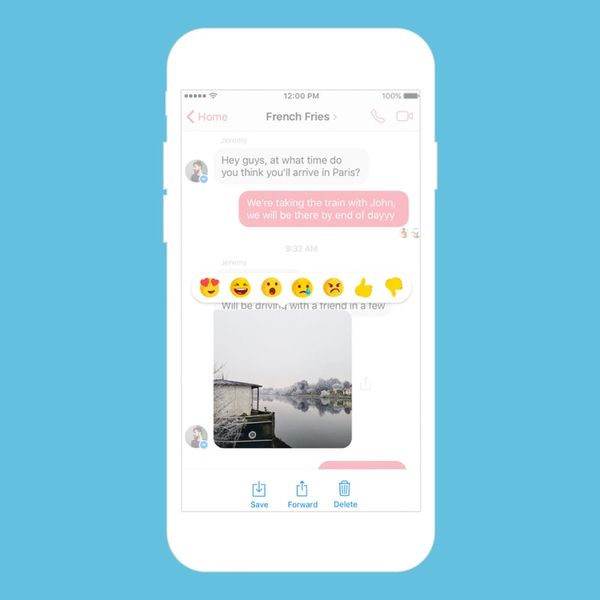 When Facebook released a whole set of reactions (that were customizable, no less), people were thrilled that they had more options than “like,” because really, sometimes a like isn’t really appropriate for a post. However, we’ve been limited to thumbs-ups of varying sizes in Facebook Messenger — until now.

In order to react to a friend’s message or picture in Messenger, simply tap and hold the post and you’ll be presented with some familiar reaction options, with the addition of dislike (Facebook describes it as “no,” but we have a feeling most people will be using it as dislike). The layout is similar to the layout in Instagram’s messaging system; you can see how people have reacted to a message in the lower corner of that message. You can tap on the emoji to see how different people reacted, like you would on a regular Facebook post. A good thing to note is that reactions aren’t limited to group messages; they can be used in one-on-one conversations as well.

If you’re not in the app (and you have Messenger notifications enabled), you’ll see a message pop up on your lock screen saying something like “X reacted Y to your photo.”

Reactions aren’t the only thing that’s new, though. Facebook also added the ability to mention people in group messages. Just type @ followed by the first few letters of the person’s name you wish to mention, then select their name from the list. When you send the message, it will appear highlighted and notify the mentioned person on their end.

Group messages can get pretty spammy sometimes, especially if the group is very large. This way, you can quickly get someone’s attention by calling them out personally so they can see “X mentioned you…” instead of “new message in X Group.”

Everyone can see the mention, but only the person mentioned gets the specific notification above.

If your office uses Work Chat in Facebook Workplace, the new features will be available there too.

So now that you have a more robust messaging experience, get out there and start reacting! Let your pal know how you really feel about the photos of their new puppy.

How do you use Facebook reactions? Tell us @BritandCo!

Shea Lignitz
Shea can be found in the nearest bookstore or brewery, exploring the great outdoors, or blasting Led Zeppelin. She grew up in the cold and rain of Northern California's redwoods but is currently wandering around Texas.
Facebook
Tech
Facebook hacks iPhone social media Tech News
More From Tech