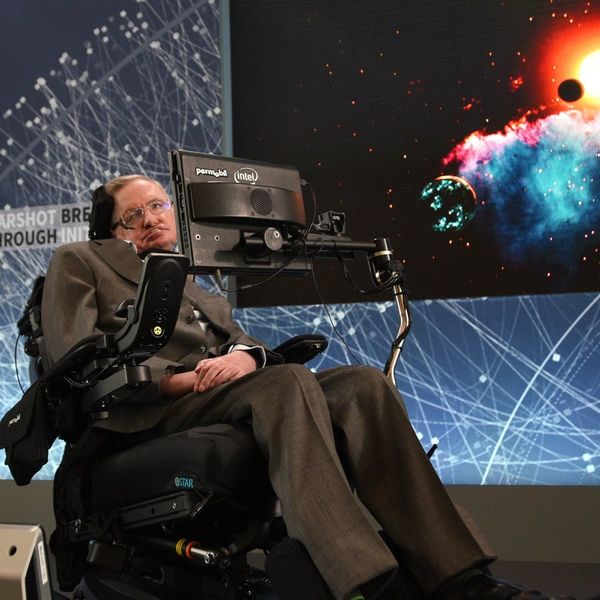 The world is mourning the loss of a brilliant mind. Stephen Hawking, the world-renowned physicist and scientist, has died at his home at the age of 76.

“We are deeply saddened that our beloved father passed away today,” Hawking’s children, Lucy, Robert, and Tim, said in a statement, according to the Guardian. “He was a great scientist and an extraordinary man whose work and legacy will live on for many years. His courage and persistence with his brilliance and humor inspired people across the world.”

A celebrated physicist, Hawking’s work has shaped modern cosmology. His life story was portrayed in the 2014 film The Theory of Everything, for which actor Eddie Redmayne won an Oscar for his portrayal of Hawking. “We have lost a truly beautiful mind, an astonishing scientist and the funniest man I have ever had the pleasure to meet,” Redmayne told Deadline. “My love and thoughts are with his extraordinary family.”

Hawking was diagnosed with motor-neuron disease when he was 21, and at the time he was given just two years to live. Eventually, he lost his ability to move and was only able to communicate by using a small sensor, activated by a muscle in his cheek.

Through roles in iconic TV shows such as The Simpsons, Star Trek: The Next Generation, and several episodes of The Big Bang Theory, Hawking became a fixture in pop culture as much as in the scientific community. The Big Bang Theory cast shared a group photo with the physicist, paying tribute in the wake of his loss. “In loving memory of Stephen Hawking,” the caption read. “It was an honor to have him on The Big Bang Theory. Thank you for inspiring us and the world.”

Hawking’s family concluded their statement with one of the inspirational quotes their father is known for. “He once said, ‘It would not be much of a universe if it wasn’t home to the people you love,’” they wrote. “We will miss him forever.”

How has Steven Hawking inspired you? Tell us @BritandCo.