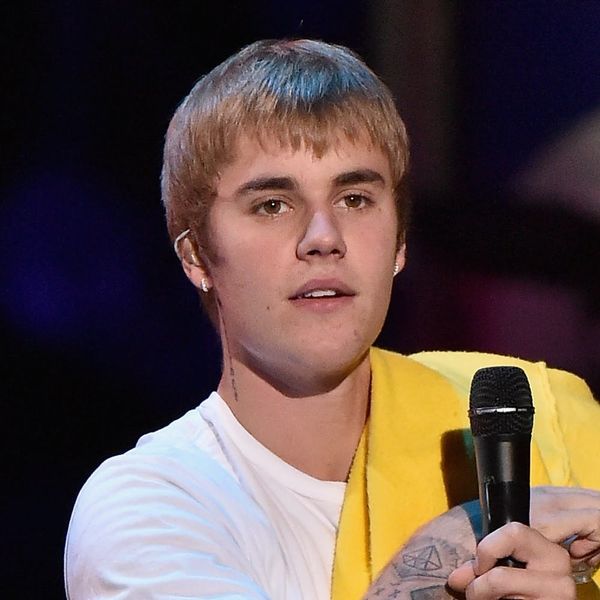 Okay, so we’re used to some pretty wacky fashions from celebs. Really, after Lady Gaga’s meat dress and RiRi’s heart-shaped fur coat, it’s hard to shock us at this point. But, lo and behold, Justin Bieber’s done it (while also probably peeving off PETA once again). That’s because he’s popped out in public looking more like Oasis’s Liam Gallagher than the “Sorry” singer we know so well (or, at least, thought we knew).

Stepping out of his SUV in a giant wolf-like fur coat, faded (acid wash?!) torn-at-the-knee jeans, a white button-up shirt, suede boots and a pair of glasses that looks like he lifted ‘em from Grandma (or a hipster boutique)… it’s something all right.

Deciding to show off his new look in various ways — i.e. hood up and coat zipped as well as undone, while flashing a giddy expression — Justin apparently wanted to prove the style is as versatile as it is, um, er… hot?

Reactions are really running the gamut from “what happened to him?!?! Omg” to “confused but I’m into it.” Granted, there are some who DGAF about the look — they just care about the fur issue: “Looks like real fur 😡.”

We can’t wait to see what he shows up in next. Anyone else hoping for a Gaga-ish Kermit dress?

What do you think about Justin Bieber’s new look? Tweet us @BritandCo!

Desiree O
Desirée O is a ‘Professional Bohemian’ who loves anything and everything related to the arts, entertainment, and pop culture. She ADORES being a ‘Newsy’ for Brit + Co, covering all of the latest tidbits of awesomeness that you want to read about. When she’s not writing, she’s either making messy art, going on long adventurous walks with her camera, or poking around over at bohemianizm (http://www.bohemianizm.com/). You can find out about Desirée O and her work at http://DesireeO.com/ or follow her on Twitter @DesireeO.
Celebrity Style
Celebrity News
Celebrity Style