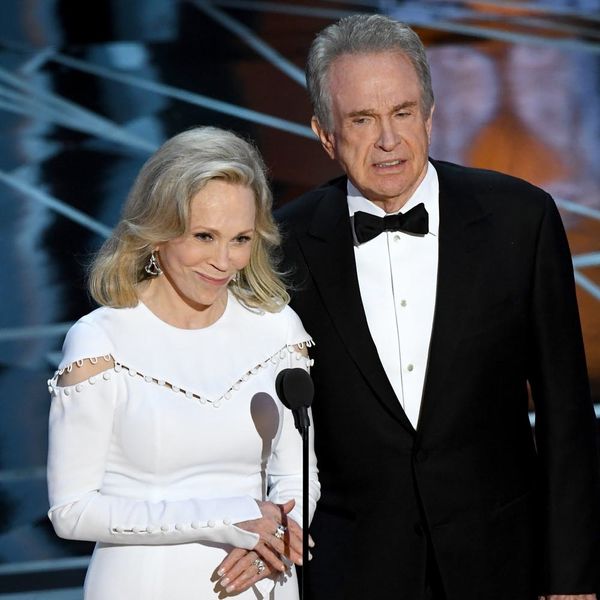 The 2017 Academy Awards certainly proved to be a night to remember with a surprise ending that no one — even host Jimmy Kimmel — saw coming. Faye Dunaway and Warren Beatty took to the stage to announce the Academy Award for Best Picture, only to stun the room (and the world, really), by accidentally naming the wrong film. Now, it’s been announced that the two icons who managed to cause such a ruckus will make their 2018 return in order to present the very same award that caused such mass chaos!

Not only has The Academy released a trailer for this year’s awards poking fun at its own flub, The Hollywood Reporter has confirmed that group has invited the Bonnie and Clyde stars back to the stage in what is sure to be a triumphant redemption.

As you’ll recall, the trouble all began last year when Beatty was handed an envelope with a card containing La La Land instead of Moonlight — the rightful recipient of receive the Academy’s top honors.

Though the actor did hesitate when he saw that had been given a card reading, “Emma Stone, La La Land,” his former co-star assumed his pause was for dramatic effect, and eventually called out the name of title seen on the card — a move she later said she later felt “guilty” for.

The mistake was corrected, but not before the entire cast of the first film had assembled itself onstage.

Stone later called Beatty, who explained the mixup to the room by announcing what he had seen on the card, into question, stating that she was holding her own Best Actress card the entire time.

The duo indeed had little to do with the mixup, however, with Brian Cullinan of PricewatershouseCoopers (the group which tallied the Oscars votes) confirming that for security purposes, two copies of each card are printed and placed in different envelopes.

“The presenters had mistakenly been given the wrong category envelope, and when discovered, was immediately corrected,” the company said in a statement.

The PricewaterhouseCoopers accountants responsible for the mixup (Cullinan included) will NOT be back for this year’s show. The Academy also unveiled a new set of guidelines to better prevent against a mix-up happening again back in January, according to THR.

Tune in to see what happens tomorrow night at 8pm EST on ABC!

Do you think The Academy is making a mistake? Sound off over @BritandCo.

Nicole Briese
Nicole is the weekend editor for Brit + Co who loves bringing you all the latest buzz. When she's not busy typing away into the wee hours, you can usually find her canoodling with her fur babies, rooting around in a bookstore, or rocking out at a concert of some sort (Guns N' Roses forever!). Check out all her latest musings and past work at nicolebjean.com.
Celebrities
TV
Celebrities Oscars