16 Female Artists You Should Know 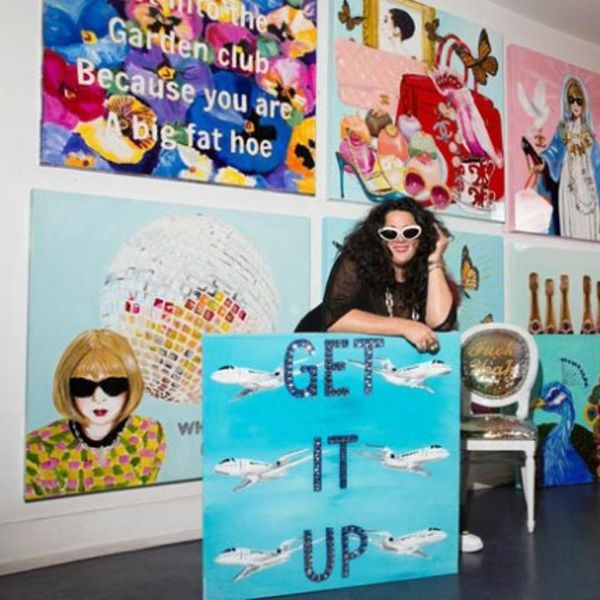 Making it as a woman in the art world is not easy. At an academic level, women are doing awesome — in fact, women make up 50 percent of art school graduates. But the professional art world has a glass ceiling that still hasn’t been cracked. According to a 2014 study from the Association of Art Museum Directors (AAMD), female directors earn 71 cents on average for every dollar earned by male directors. That’s even less than the oft-debated statistic that women make 77-cents to every dollar men make in the workforce. Despite these inequalities, women are making names for themselves through their artistic prowess and thoughtful approaches to visually communicating important social issues. Get your cultural fix with these 16 uber-talented female makers you should know about.

1. Alexa Meade: Alexa Meade’s paintings are quite a sight to behold. She uses the human body as her canvas to turn real-life people into works of art that look two-dimensional. Check out Alexa’s TED Talk, “Your Body is My Canvas,” to learn more about her unique approach to painting. (Photo via Alexa Meade)

2. Laure Prouvost: The Turner Prize is one of the most prestigious honors an artist can earn. It also serves as a glaring example of the lack of gender equality in the art world — women have made up only 13 percent of Turner Prize winners since 1984. In 2013, French mixed-media artist Laure Prouvost joined this super elite sisterhood when she won the Turner Prize for Wantee, a video installation that included elements of sculpture, painting and drawing. (Photo via Laure Prouvost)

3. Sam Vernon: Sam Vernon is another mixed-media artist on the rise. Her work fuses drawing, photography and print making to address social issues of post-coloniality, racialization and sexuality. In 2010, the City of New York’s Department of Transportation tapped her to work with artists Heidy Garay and Mikell Fines Iles to paint a large-scale mural under the Brooklyn Bridge in DUMBO. The mural project ended last year, so if you’re looking to see more of Sam’s work, then check out her “How Ghosts Sleep” installation at the Olympic Sculpture Park in Seattle, WA, which starts on Mar. 28. (Photo via Sam Vernon)

4. Victo Ngai: Victo Ngai is a New York-based illustrator from Hong Kong who has created gorgeous work for companies such as IMAX, McDonald’s and General Electric. Victo, a graduate of the Rhode Island School of Design, was named one of Forbes’ 30 Under 30 (Art and Style) in 2014. Her advice to aspiring freelance illustrators? “Freelance illustration is more than a job — it’s a lifestyle,” Victo notes on her website. (Photo via Victo Ngai)

5. Chitra Ganesh: This Brooklyn native’s work is inspired by Hindu, Greek and Buddhist iconography as well as nineteenth century European portraiture. Her drawings and illustrations fuse anime and a comic book-style narrative form to present these themes in a totally contemporary way and express her own articulation of femininity. (Photo via Chitra Ganesh)

6. Aurel Schmidt: Aurel Schmidt’s work transforms everyday mementos such as cigarette butts, tampons, pill bottles and even a boyfriend’s real chest hair into art. In fact, this bad-ass native of British Columbia, Canada was featured in the Whitney Biennial in 2010 with a submission that featured a Minotaur made out of cigarette butts and Budweiser cans. (Photo via Tim Barber/HUH Magazine)

7. Caitlin Cherry: Caitlin Cherry lives and works as a multimedia artist in New York City. A year after graduating with an MFA from Columbia University, she snagged a summer solo show at the Brooklyn Museum that featured work inspired by Leonardo da Vinci’s sketches of weapons. How is that for cool? (Photo via Caitlin Cherry)

8. Nanibah Chacon: Nanibah started her career in art at sixteen as a graffiti artist. Ten years later, the birth of her son inspired her to explore other mediums, like oil painting. She has since become known as much for her mural painting as for her graffiti. She has created works for the International ISEA Arts and Technology Symposium in Albuquerque, New Mexico and the Navajo Nation Museum in Window Rock, AZ. The female characters in her work allow Chacon to spark a dialogue around feminism in traditional and modern cultures. (Photo via Nani Chacon)

9. Lisa Solberg: Lisa is an abstract expressionist painter and installation artist recognized for her large-scale pieces, which can literally take up a whole room. Her work has been exhibited in both solo and group shows across the country. (Photo via Lisa Solberg)

11. Yuka Otani: Yuka Otani was trained as a glassblower in Japan before coming to the United States in 2005 to pursue her master’s degree at the Rhode Island School of Design (RISD). Her work incorporates transparent materials like glass, water and light and draws on the connection between economic bubble bursts and glass bubbles. (Photo via Shiro Oni)

12. Tauba Auerbach: Tauba Auerbach is an artist who plays with perceptions of space. Her art prowess expands far beyond painting — she has also worked in photography, sculpture, artists’ books and performance. One of her most recognizable exhibits was her 2009 Auerglass piece, where she designed a two-person, working wooden pump organ. She and her musical collaborator performed a duet on it daily. (Photo via Tauba Auerbach)

13. Wangechi Mutu: Wangechi Mutu’s collages explore themes of cultural identity, colonial history, contemporary African politics and fashion. She is a Kenyan native who has been trained as both a sculptor and anthropologist. She currently lives and works in New York. (Photo via Wangechi Mutu)

14. Vanessa Prager: Vanessa Prager is known for her colorful illustrations and paintings that feature snapshots of her life. She currently lives in Silver Lake, CA and believes that making art makes her feel the most comfortable. (Photo via Vanessa Prager)

15. Suzy Gonzalez: Artist and feminist Suzy Gonzalez grew up in Texas, but is now a student at Rhode Island School of Design, where she is pursuing a MFA degree in painting. Her work as an artist examines women through a lens of marginalized identity and explores themes of fashion, beauty and advertising. (Photo via Hispanic Pro)

16. Ashley Longshore: Ashley Longshore is a New Orleans-based artist known for her Hollywood clientele and long-standing collaboration with Anthropologie. She’s your favorite actor’s favorite artist and she is basically besties with Blake Lively. Her work employs pop art and portraiture to poke fun at American consumerism. She sells a lot of work on her Instagram, so you should definitely follow her there to see what some of your favorite stars are purchasing. (Photo via Alexandra Arnold Photography)

What do you think of these talented women? Who are some of your favorite artists?