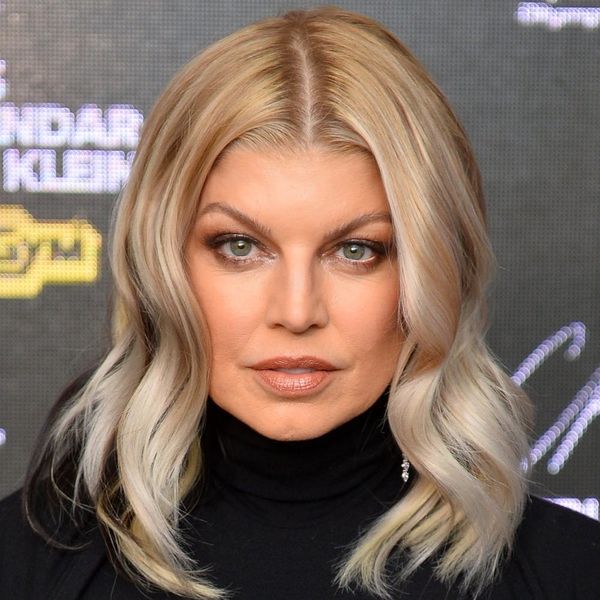 Fergie is trying a whole new look on for size! The songstress, who’s been flying solo since September after announcing her split from her husband of eight years, Josh Duhamel, is showing off her dark side, ditching her shoulder-length, blonde locks, for flowing dark raven tresses that rendered her practically unrecognizable. The mother of one debuted the new look on Instagram, leaving only black and blue heart emojis by way of explanation. The snap features her in a whole lot of black and blue thanks to her plaid and leather motorcycle jacket with buckled cuffs, jet black nails, and plenty of bling.

From the looks of other recent posts, in which she’s seen with her regular flaxen locks while donning the same jacket, we’d be willing to bet the look is a temporary wig to be featured in an upcoming project — perhaps a new video?

It certainly wouldn’t be the first time the 42-year-old has changed up her looks for a music clip. The footage for her latest single, “A Little Work,” which was released several months prior, sees her swapping her hair hue no less than five times as she looks back on life as everything from a struggling, neon yellow-haired waitress to a blue-haired, ethereal fairy enchantress.

In addition to showing off her latest tress change, the 42-year-old also announced a new contest she’s now holding in conjunction with the song, writing, “Tell me something [you] need a little work on… 💙💙🖤🖤 ”

The Four judge is asking fans to make and post a Love Actually style photo or vid with cards that explain the faults you plan to work on in 2018 and tag her @fergie, along with the hashtags#ALittleWork#iHeartContest.”

tell me something u need a little work on... 💙💙🖤🖤 make & post a photo/video like this for me & @iHeartRadio (tag me @fergie & use #ALittleWork #iHeartContest)

After seeing Fergie’s new look, “Dye hair” is definitely at the top of our list!

Kat Armstrong
Kat has been a writer, social media maven and mom for longer than she's willing to admit. She's also spent time in front of and behind the camera, interviewing celebs, politicians and acting as a producer for fashion and artistic photography shoots. When she isn't writing for various orgs and publications, she's hanging with her kids, husband and French Bulldog, Peter, in Toronto, Canada.
Celebrities
Hair
Celebrities Celebrity Hair Hair Hair Color hair dye