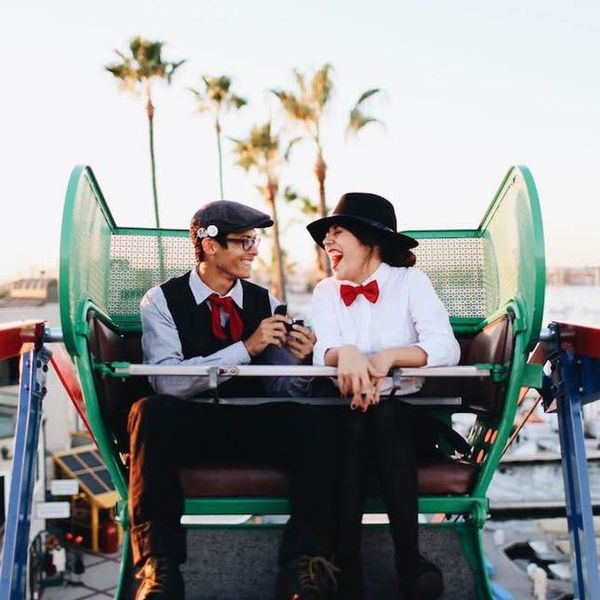 It’s not even May yet, but it sure seems like all your friends have started announcing their engagement this year. You’re pumped (let’s hear it for wedding season ’17 and ’18!) because not only do you love weddings, but your friends make for some V cute couples. Truth be told, you’re probably still reeling from all their engagement stories. BUT we have another one that will sweep you off your feet. Inspired by the adorable couple Mary Poppins and Bert, Martha + Tony’s costume proposal is the sweetest start to happily ever after we’ve seen in a *while*. If you couldn’t get enough of the latest picture-perfect park proposal, you’ll want to keep scrolling for this equally as cute (and creative) theme park proposal, where the BFF was totally in on the surprise. Chim chim cher-ee!

When Martha Mendez went to get her nose pierced and some ink done by tattoo artist Tony Nguyen, little did she know that she had just met her future BF and fiancé. The two shared their very first date under the stars at Balboa Island in Newport Beach, where they stayed up until 4am talking and listening to acoustic music. Martha knew then and there that she loved Tony. Though they watched the ferris wheel go round and round that day, they wouldn’t actually go on the ride until he proposed.

Tony decided that the place needed to be somewhere special, some place meaningful, so where they had their very first date was perfect. After two weeks of planning between Tony and Martha’s BFF Valerie, it came time to revisit the island.

On October 31st, the day of their first date three years ago, Tony took Martha back to Balboa Island for the ride of her life. Of course, they were dressed up in the cutest couple costumes ever (Mary Poppins + Bert) in the spirit of Halloween. When they finally reached the very top, Tony popped the question.

Because Martha had sensed Tony was acting a little odd and seemed to be in an “extra chipper mood,” her immediate reaction was to burst into laughter saying, “I knew it! I knew it! I had a feeling!” Eventually she said yes, shed a few tears and sealed the deal with a kiss. Their proposal came together perfectly full-circle, from their first date to the next step in their shared adventure.

Speaking of adventure: They eloped this month, with their BFF Valerie there to capture the magic. Congrats to the adorable couple!

Did this proposal story take you on a ride? Follow us on Pinterest for all things wedding!

Grace Lee
Grace is an LA-based freelance writer, documenting her everyday life via her Instagram. She's a fan of spontaneity, individual style, all things Harry Potter, cuddling with her two dogs, and exploring new places. More about Grace can be found on her blog, Girl Meets World.
Engagement
Wedding Planning and Decor
Engagement Photography