#FirstTimeISawMe Is the Smartest Viral Campaign of the Year 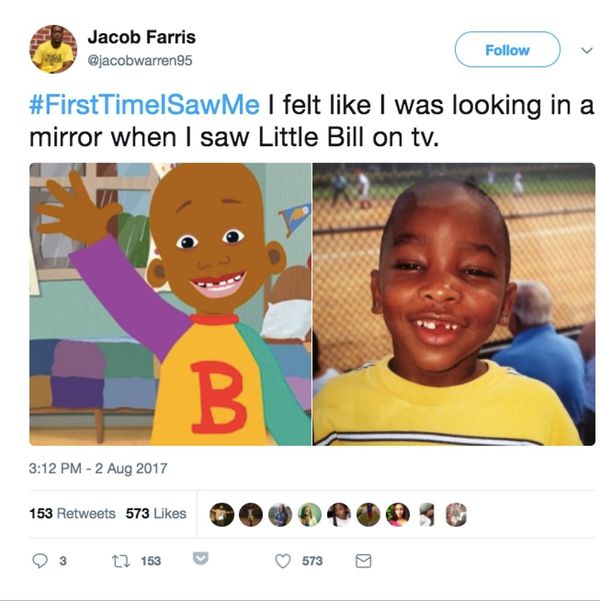 After #OscarsSoWhite went viral in 2016, the conversation about the necessity of diverse representation of characters and stories in TV and movies has gone fully mainstream. Now there’s a new viral hashtag where people are sharing the very first time they saw a character on TV that reminded them of their own identity with #FirstTimeISawMe. The results are extremely moving.

The hashtag was created by Netflix to give people who have been historically left out of film and TV — or at least not given robust characters — a common platform to discuss, celebrate, and reflect on their earliest memories of seeing someone like them on TV.

The #FirstTimeISawMe was in the Culture Shock episode of The Proud Family. I'll never forget how emotional it made me at age 10. pic.twitter.com/mYrGYmTtv1

Journalist Fatima Puri’s tweet about the first time she saw characters that looked like her on TV went viral. Puri tells Brit + Co that she was already a fan of The Disney Channel’s cartoon, The Proud Family, when she saw the episode that stuck in her memory at the age of 10. In the episode, the main character, Penny, participates in a cultural exchange with a Muslim classmate whose lineage is Pakistani, Radika Zamin. After a fun night out, the Zamins and Penny arrive back to the Zamins’ home to find the garage vandalized with the phrase “Go back to your country.”

“This episode came out just a few years after 9/11,” Puri tells us, a time when she and other people with Middle Eastern and South Asian heritage were scrutinized for their ethnicity. She says that seeing a Pakistani character on the show was the “first time I had ever seen someone who remotely resembled me,” and that she appreciated the way the show brought up issues a lot of people just weren’t talking about openly.

An awkward Mexican American finally made her way into our living rooms. 'Like looking in a mirror. #FirstTimeISawMe pic.twitter.com/w56K43IcDD

In addition to diversifying the races, religions, and ethnicities of TV and film characters, there’s also a need to incorporate nuanced characters who are LGBTQ+, disabled, who deal with mental illnesses, who speak multiple languages, who are poor, etc. Of course, there are people in real life who fit many or even all of these descriptors, and advocates say these stories should also appear onscreen.

Writer Keah Brown tells Brit + Co that representation in film matters more than some people know. Brown has written about the need for better and more representations of Black women, disabled people, and people with mental illnesses in film, and says, “Seeing yourself reflected in a positive way can literally make your worst days better, it can make you feel like you matter.”

Brown says that when she was growing up, she didn’t see characters like herself “represented in any sort of positive way,” which had a negative impact on her mental health. The dearth of diverse characters made her feel like she “deserved” the depression and anxiety she struggled with, she tells us.

Brandy in the mid-late 90s. Moesha, Cinderella and her music. My first doll was Brandy fam 😊 #FirstTimeISawMe pic.twitter.com/0vHuDw8BYL

#FirstTimeISawMe I felt like I was looking in a mirror when I saw Little Bill on tv. pic.twitter.com/LHngm2C1OJ

Scholars who study representation in media have also discussed the myriad psychological and social harms of a whitewashed TV and film industry. Michael Morgan, a media scholar and professor emeritus at the University of Massachusetts Amherst, told HuffPost earlier this year that, “Stories affect how we live our lives, how we see other people, how we think about ourselves.” Because of how profoundly everyone is impacted by the entertainment they consume, Morgan added that it’s “very dangerous” and “very damaging” not to see oneself represented onscreen.

For its own part, Netflix has been making progress on several of these fronts, and is often praised by media observers for its commitment to telling diverse stories (it’s worth noting that Netflix launched #FirstTimeISawMe several weeks out from the Emmy Awards, and is nominated for several categories including Best Drama and Best Comedy). Alongside other online platforms like Amazon and Hulu, Netflix is leading the way in diversity in film.

Netflix PR representative Myles Worthington tells Brit + Co that the company has “a joyful obligation to provide truly inclusive, intersectional, and layered characters and stories… if we uncover a unique story that we think our members will enjoy, we can make it, it’s that simple.”

With so many people excited to share their own stories about feeling seen in movies and TV, there’s a clear message that diverse characters and stories are not only necessary and appreciated, but that we need a lot more of them.

Do you have a story about the first time you saw yourself represented on TV or in a movie? Tell us about it on Twitter @BritandCo.

Elizabeth King
Elizabeth King is a politics, history, and culture writer based in the Twin Cities. She is generally pretty cranky but still enjoys traveling, music from the early 2000's, and plotting the resistance. Feel free to say hi on Twitter at @ekingc or check out some of her work at www.elizabethcking.com.
Netflix
Diversity
Netflix
More From Diversity