This Inspiring Photo Series Draws the Future for NICU Babies 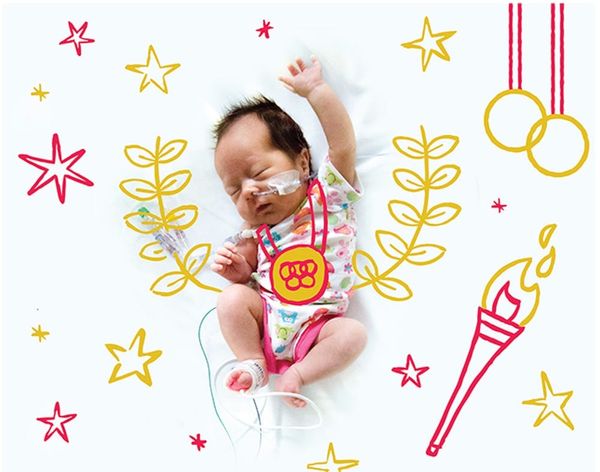 Sleeping takes up most of the day for the babies born early (between 25 and 37 weeks gestation, with legs barely thicker than a pencil — cue the awws) who live their first few weeks in the neonatal intensive care unit (aka NICU) at the Children’s Hospital of Atlanta at Scottish Rite. Now some of those little ones are starring in this sweet series, “From the NICU to the Moon.”

The photos, taken by communications team member Chrissie Gallentine, in collaboration with Matchstic — a brand identity house — imagine the possible futures ahead for these tiny warriors. The NICU nurses know these babies have major prospects because they witness the fight in their little bodies on a daily basis.

Grey’s Anatomy is always looking to add to its staff, we’ve heard. Before you know it Madilyn (above), a future physician, will be charting at Seattle Grace Hospital.

Forget Top Chef; Ariana is bound to be the most adorable chef we’ve ever craved a meal from.

We’re dreaming of Sofia gracing the stage as Clara in The Nutcracker, twirling in an LED Tutu. Wouldn’t that just be the best version of the ballet ever?!

There’s still so much to explore in space, and we’re confident this future astronaut will be ready for the adventure. Brentley may just be the first little guy to explore Mars.

Carolina may not qualify for the Rio 2016 Olympics but we’re confident this future Olympian will be snatching all the gold medals in the 2032 games.

New parents, did these cuties just give you the best idea for creative pix of your newborn? We thought so.

These adorable little ones have big dreams — we want to know what yours are. Let us know in the comments below.