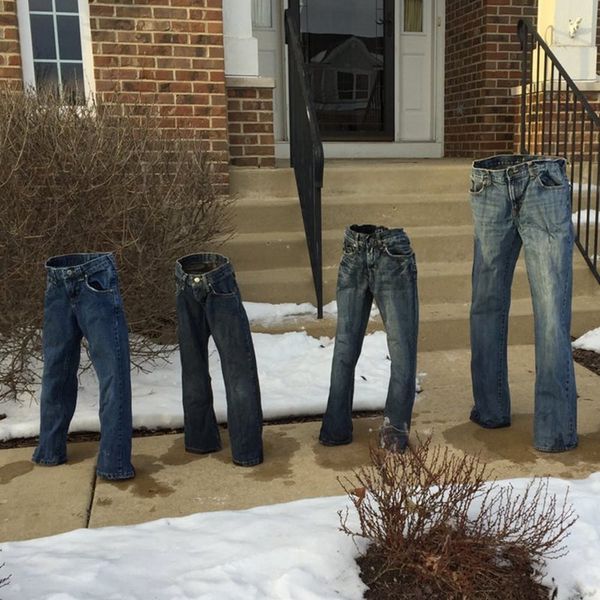 With a massive snowstorm slated to hit the East Coast soon, this weekend is quickly ramping up to be a hot cocoa and movie extravaganza. But if you somehow manage to watch everything new to Netflix this January and are left with nothing to do, there’s a trending winter DIY activity that was made for this kind of weather. Are we guarantee your neighbors are going to do a double-take. Introducing: frozen pants.

The hilarious idea seems to have stemmed from Tom Grotting, a Minneapolis resident who – according to ABC News – has been pranking his town with frozen pant art installations for some time now. He tells ABC that he “soaks the pants in a bucket of water and then hangs them outside, sculpting them as they freeze.” The whole process takes less than 30 minutes and the pants can usually be worn again after they’ve thawed.

Not surprisingly, after Tom posted a photo of his famous frozen pants (that’s a phrase I’d never thought I’d say) on Facebook page I Love NE Minneapolis, the idea went viral. Now folks, all over the country dealing with freezing temps are making the best of a chilly situation with this playful (and also mildly creepy) lawn decor.

One Twitter user shared her take on the idea captioning the pic, “Taking a break from writing to create some subzero fun for the neighbors to enjoy – or not.”

And why stop at pants really? This person got aspirational about the weather by freezing a bathing suit!

If you try this fun DIY this weekend, share a pic with us on Instagram by using the tag #iamcreative.