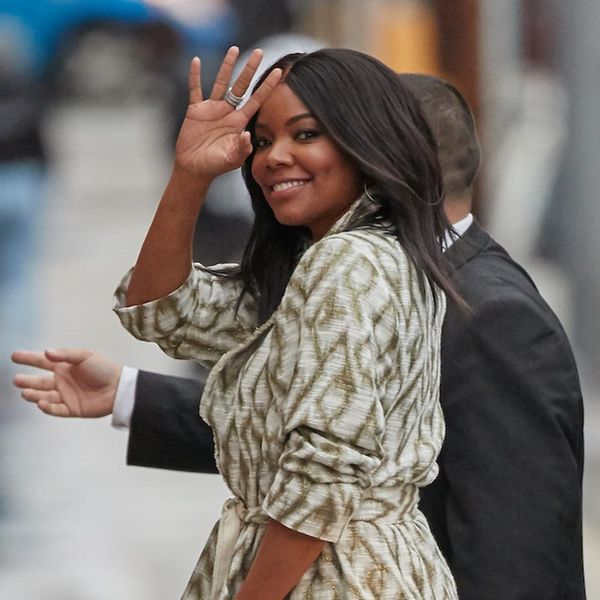 Much like Gisele has mastered the art of sporting event style (Did you see what the model wore to the Super Bowl?), Gabrielle Union scored a slam dunk for her ensemble in New Orleans for the NBA All-Star Game 2017. The Being Mary Jane actress and husband Dwayne Wade hosted a “His and Hers” pop-up shop that included a sneak peek at her new haircare line Flawless by Gabrielle Union. While Gabby always looks great, we noticed she was wearing something that we can actually afford to buy.

In a pic shared by her hairstylist Kiara Reeves, Gabrielle wore a cropped olive green hoodie and a pair of distressed skinny jeans that stop at the ankle to show off her Steve Madden olive-toned satin booties with orange laces.

The Fuego Booties ($150) feature a 4.75 inch heel (wowza!) and can be found on Steve Madden’s site. Yes, you read that right. She’s wearing a pair of $150 booties by a brand you likely have in your closet right now.

What do you think of Gabrielle’s style? Would you wear the booties? Tweet us @BritandCo!

Channing Hargrove
Channing Hargrove is a freelance fashion editor and writer in New York City. When she isn’t writing about clothing (or shopping, for research, of course), Channing is writing about life in a tiny studio apartment in a big city — and what she’s wearing — on her blog, Channing in the City.
Budget-Friendly
Celeb Style
Budget-Friendly Celebrity Style Shoes