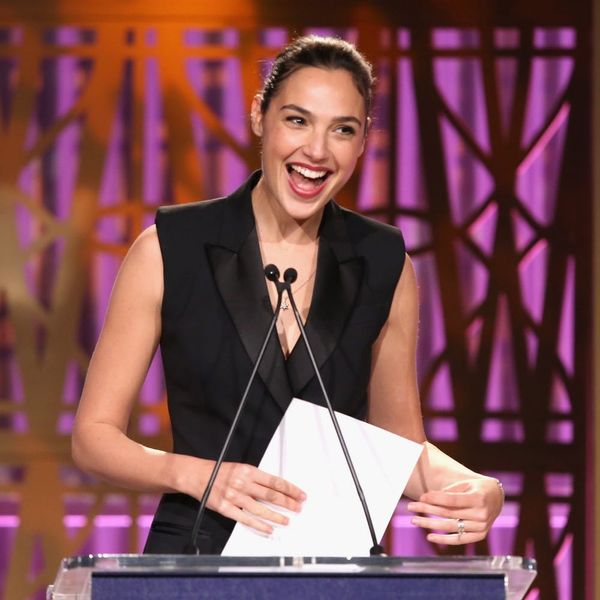 Gal Gadot is putting her superhero persona to good use in the real world. Appearing at The Hollywood Reporter‘s 2017 Women in Entertainment breakfast at Milk Studios in LA, the Justice League star presented a Wonder Woman scholarship on behalf of Warner Bros.

“I’ve had the privilege of portraying a superhero onscreen, but the young women here today are the real superheroes,” she said in her speech. “They’ve overcome so many challenges in their lives, and they’re driven to do more. They’re the true leaders of tomorrow.”

The first-time scholarship — which provides a four-year full ride to Loyola Marymount University — was presented to a student named Carla, who started at the school just a few weeks ago.

“She’s strong-minded, opinionated, and gutsy. She wants to be a screenwriter, and she’s already impressed everyone who knows her — her fellow mentees, her professors, and everyone in this room who’s met her,” Gadot said of the recipient, per THR. “She won’t be able to continue at LMU without this funding. Similar to many other great young women in this program, her education is hanging by a thread.”

Carla, for her part, was both thankful and surprised, though she admitted she’d had her suspicions, saying, “I knew something was up! Y’all are sneaky.”

After thanking her parents and acknowledging how much work is still ahead of her, Carla ended with a Frida Kahlo quote: “Feet, what do I need them for if I have wings to fly?” She added that she was lucky to be “told from a young age that I have wings.”

Justin Timberlake also appeared at the event, showing up to announce scholarships for The Hollywood Reporter’s Women in Entertainment mentorship program and three additional full scholarships to Loyola Marymount University.

What words of encouragement have always helped you reach higher? Let us know @BritandCo!

Desiree O
Desirée O is a ‘Professional Bohemian’ who loves anything and everything related to the arts, entertainment, and pop culture. She ADORES being a ‘Newsy’ for Brit + Co, covering all of the latest tidbits of awesomeness that you want to read about. When she’s not writing, she’s either making messy art, going on long adventurous walks with her camera, or poking around over at bohemianizm (http://www.bohemianizm.com/). You can find out about Desirée O and her work at http://DesireeO.com/ or follow her on Twitter @DesireeO.
Empowerment
More From Empowerment