Please Stop Talking About How George W. Bush Cried at His Father’s Funeral 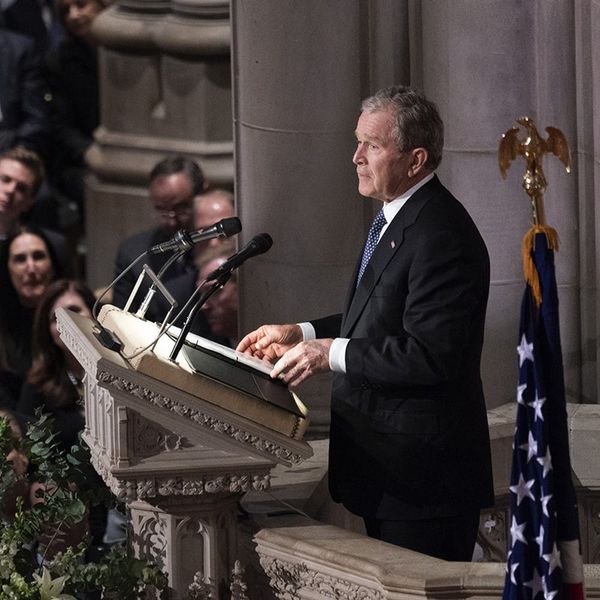 On Wednesday, George W. Bush delivered a eulogy at his father George H.W. Bush’s funeral. While at the podium, standing in front of all of America’s living presidents, royalty from around the world, and his entire family, he recalled the elder Bush as not just a former president, but his dad. Staying true to form, Bush made some light-hearted jokes about his father throughout his eulogy until, in his closing remarks, he choked up a bit and said, “Through our tears, let us know the blessings of knowing and loving you — a great and noble man, the best father a son or daughter could have.”

Shortly after Bush’s speech, headlines like “George W. Bush Breaks Down in Tears While Delivering Eulogy for Father” and “George W. Bush chokes back tears in eulogy for father” rolled in. One article from The Washington Post reads, “His voice shook and, finally, he broke down and sobbed.”

Of course, it’s striking to see an ex-president in a vulnerable state. But it is also disappointing that, at the end of a year which focused so much on amending the toxically masculine behaviors of men, we are opting to dwell on the fact that a man cried at his father’s funeral — no matter the man in question.

Choosing to sensationalize a man’s public expression of emotions reinforces the ethos that it’s something momentous, something novel and newsworthy. Even if that may be partly true in practice, shouldn’t we, as a culture, be working to normalize men’s emotional vulnerability?

Just months ago, a fetishization of male emotions played a pivotal role in a different kind of story: Brett Kavanaugh’s Supreme Court confirmation.

In Kavanaugh’s testimony denying Christine Blasey Ford’s accusations of sexual assault, he famously shed tears while defending himself in front of the Senate Judiciary Committee. (A New Yorker piece describes him as “blubbering like a child.”) In that instance, male tears poured into a different sort of public reaction. Some believed the display to be a calculated performance aimed to garner sympathy after the disturbing claims made by Ford.

Whether Kavanaugh’s tears resulted from a sense of being wronged, or were a manipulative display, we will likely never know. But perhaps the situation would have played out differently if his woundedness hadn’t become the crux of the story.

A culture that embraces men’s public displays of emotion would unquestionably lead to a more communicative and empathetic climate for all of us. But creating news from those moments is not the way to create that change. Male tears happen and, hopefully, they’ll begin to happen more often. But hardly — if ever — are they the most important part of the narrative.

Cortney Clift
Cortney is the senior writer and special projects editor at Brit + Co. She typically covers topics related to women's issues, politics, and lifestyle. When she's not buried behind her computer you'll find her exploring New York City or planning her next big adventure.
Politics
Current Events
Politics
More From Current Events