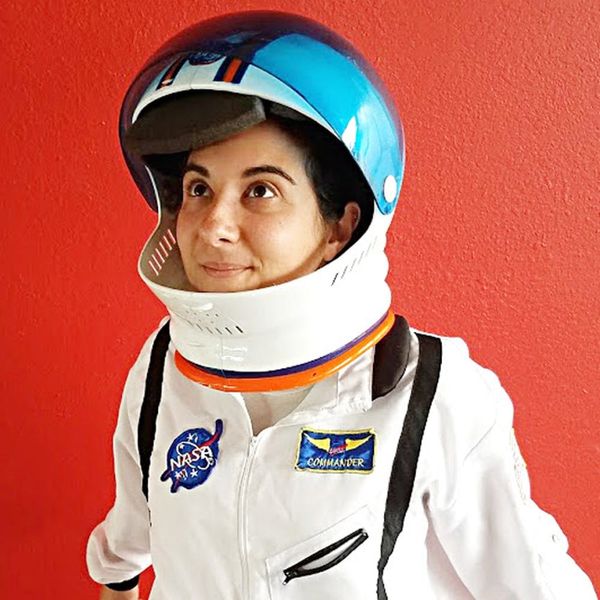 Space has inspired everything from unforgettable movies like Apollo and Gravity to gorgeous galaxy tattoos that honor the mystery of the cosmos. Now author Gina Damico is giving a new spin to planets and stars with her newest novel, Waste of Space. It’s a hilarious and all-too-real look at reality TV through the eyes of teens who happen to be starring on a reality show set in space… or so they think. You’ll giggle your way through the realization that nothing can stop drama — not even zero gravity. Today we’re catching up with Damico and chatting about her creative inspiration, lady heroes, and more. Scroll on to learn more about this brilliant writer!

GM: I’d love to say that I do my best writing while snacking from a constantly replenished cheese plate and enveloped in a nest of specially trained cats who purr at just the right frequency for maximum workflow — but more often than not, I’m just splayed out inelegantly on my couch and in need of a shower. (Full disclosure: Sometimes there is a cat there. Always there is cheese.) As for when I write best, it’s any time I’m jacked up on too much coffee. I wish that this weren’t the case, but it seems that caffeine somehow opens up a Creativity Portal to Awesomeness, and who am I to argue with science?

B+C: What’s the strangest thing you’ve ever done in the name of book research?

GM: When I was writing Rogue, the third book in the Croak trilogy, I made one of the locations in the story the geographical center of the contiguous United States — a random spot among the cornfields in Lebanon, Kansas. I did as much internet research about it as I could from afar, but since I happened to be planning a road trip through the middle of the country anyway, I made it a point to swing by and get a more up-close-and-personal look. It was very cool! It had a plaque!

GM: If I’m actively working on something, I go for a walk. Something about forward momentum helps; it probably has to do with a metaphor. If I’m looking for ideas for a new project, I read National Geographic, because there is nothing crazier and more inspirational than the real world. The other day I read an article about a cave, which led to seeking out another article about a cave, and literally eight hours later, it had consumed my every waking thought. I am still thinking about it. ALL IS CAVE NOW.

GM: Too many on the list to count, but at the moment my favorites are: Dr. Mae Jemison, the first woman of color in space; and Julia Child, because aside from all her cooking talents, she was tall and awkward and made mistakes on camera and was a stone-cold weirdo — and she totally owned it. (Photo via Jemal Countess/Getty Images for National Geographic Channel)

GM: I’m loving the art of Stephen McMennamy (@smcmennamy), who does these perfectly combined photos of two different things that fit together perfectly. Just go look at some, because I’m not doing them justice by describing. (What am I, a writer or something?) They’re just so surreal and unexpected, and spark the brain in ways you can’t anticipate.

GM: In the days after the election, I, like many others, was feeling very angry and distraught and overwhelmed by the world. Naturally, I turned to books for comfort — but none on my to-read shelf jumped out as what I needed right then and there. So I went to the library instead and pulled a book off the shelf that I hadn’t heard of: Beyond Words: What Animals Think and Feel, by Carl Safina. It’s a fantastic dive into the question of whether animals have emotions, specifically focusing on the astoundingly intricate social structures of elephants, wolves, and whales.

It was a joy to learn in depth about these animals, these whole worlds they inhabit that are outside of us, so alien to us, that have nothing to do with politics or personal human drama or vitriol on the internet. There’s a staggeringly infinite amount of amazing stuff in this world, and at that time, that book was a potent and much-needed reminder of that. By the time I got to the last page, I wanted to pack my bags and go study elephants for the rest of my life. I still haven’t ruled it out.

What’s next on your to-read pile?

GM: The Hate U Give, by Angie Thomas.

What advice do you have for aspiring creative ladies?

GM: Don’t wait for anyone to tell you you can do something. Make the awesome thing first, without listening to naysayers or your own self-doubt, and figure out all the boring details later. (Unless you’re trying to, like, build your own spaceship. You should probably do the math in advance with that one.)

Got an author you’d love to see interviewed? Tweet us @BritandCo and let us know!

Angela Velez
Angela is an MFA Fiction candidate at the University of Pittsburgh. You can find her reading obsessively, wandering bookstores and watching melodramatic television.
Books
Creativity
Books
More From Creativity