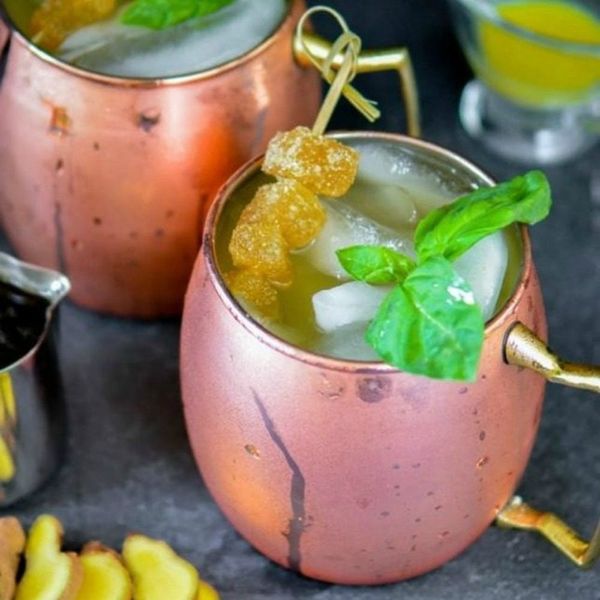 No matter what your summer weekends entail, one thing is certain: There will be cocktails. Saturday afternoon poolside entertaining definitely calls for a round of boozy lemonades — and your Sunday brunch party? That’s reserved for the decked out Bloody Mary. So what are you doing to shake things up on Friday eve as the chaotic week comes to an end? You’re making boozy ginger ale drinks, that’s what. Grab your adorable homemade cocktail stirrers, throw your feet up and enter chill mode with these 16 fizzy bevies.

1. Strawberry Ginger Ice Cream Floats: Let’s be honest: It’s near impossible to outplay an ice cream cone when it comes to cooling off in the beaming sun — but this spiked ice cream with pureed strawberries will totally float your boat. (via Crumb Kitchen)

2. Jubil8: To create its very own version of the traditional Mint Julep, Kentucky’s own Ale-8 ginger citrus soda is shaken with ginger spiced simple syrup and a splash of bourbon for good measure. (via The Kentucky Gent)

3. Cranberry Moscow Mule With Homemade Ginger Ale: Moscow Mules are easy to recognize anywhere with those distinct and gorgeous copper mugs. The usual tart, spiced and tangy flavors are accompanied by some berry goodness in this blend. (via Chef de Home)

4. Pine-Infused Vodka Sour Cocktail: If you love sticking fresh herbs in your drinks, remember this one for the holidays. This cocktail takes on a lighter and more spritzy Vodka Sour Cocktail complete with the addition of pine. (via The Girl on Bloor)

5. Blackberry Ginger Mocktail: Now here’s a unique twist: This mocktail was created with the expecting mother in mind. Made as a go-to morning drink, the ginger settles nausea while blackberries release antioxidants. Don’t worry, if you’re not expecting, you could easily splash some vodka in there. (via The Worktop)

6. Mango Strawberry Sangria: When the need to feel elegant strikes, go for the sangria. This colorful white wine sangria is perfect to sip while kicking back and catching some rays or while reading quietly in the shade. (via Host the Toast)

7. Blueberry Ginger Fizz: Blueberries in ale are fantastic, and if you’ve ever had a blueberry wit, you know what we’re talking about. With that said, it’s no surprise that blueberries go swimmingly with ginger ale in this fruity fizz. (via The Missing Lokness)

8. Blood Orange and Ginger Ale Mimosa: Create excitement at your next brunch with these ruby red mimosas. Thanks to blood oranges, these cocktails shine a little brighter and are a little more exciting than their run-of-the-mill counterpart. (via Hot Beauty Health)

9. Cucumber Ginger Fizz: If you dig that cool and crisp cucumber water they give you at the spa, you should probably try its excitable and feisty sister which is shaken up with ginger ale and vodka. Save the cucumber water for the morning after. (via Sweetsonian)

10. Blackberry Vodka Punch: Blackberry Ginger Ale is tasty AF on its own. We can’t even fathom how amazing it would be stirred with vodka, orange liqueur and fresh berries. (via Mantitlement)

11. Grapefruit-Ginger Bourbon Sour: Grapefruit — people either love it or hate it. However, we think it’s safe to say that even the haters of this bitterly tart citrus fruit could easily fall in love with it after knocking one of these back. (via Fake Ginger)

12. Spiced Apple Sangria: Don’t eat your apple pie — drink it! This spiced apple concoction is basically the fall season in a glass, but who are we kidding? With white wine, a splash of cider, ginger ale and spices, you can enjoy this year round. (via Kitchen Treaty)

13. Blackberry Bourbon Smash: Blackberries and bourbon make for a smashing trio when blended with ginger ale. With its perfect balance of sweet and tart and its vivid hue, its ideal for both a snazzy dinner party or low-key brunch. (via The Little Epicurean)

14. Spiced Berry Cooler: Flavors of spiced winter berries and tart fresh lemon juice kick ginger ale up a few notches in this non-alcoholic cooler. Because it’s a mocktail, kids can enjoy it too. If you’d rather spike it, I’m sure that can be done… (via Kitchen Sanctuary)

15. Gin Buck: If you’re in with gin, we recommend giving this cocktail a whirl. It’s clean, simple and downright sophisticated. The addition of fresh lemon gives it a nice refreshing flavor. (via The Drink Kings)

16. Pimm’s Cup: We’ve been seeing this classic New Orleans cocktail around the Internet quite frequently, and it’s no wonder why. With subtle notes of citrus and spice, it comes in several variations. This one replaces the usual lemonade with ginger ale and it is on point. (via The Speckled Palate)

Dana Sandonato
Born in Canada and now living in the beautiful state of North Carolina, Dana is a coffee-reliant food writer with a healthy appetite, a taste for culinary adventure, a thirst for good beers, and an endless hunger for food photography. When not writing for Brit + Co, she can be found pouring herself into her blog-turned-webzine, Killing Thyme, or taste-testing at local breweries with her husband. Dana's ideal down time includes pizza, marathoning on Netflix, or watching her fave flicks from the 80s and 90s - no matter how great or awful they are!
Drink
Cocktails
Drink
The Conversation
More From Cocktails