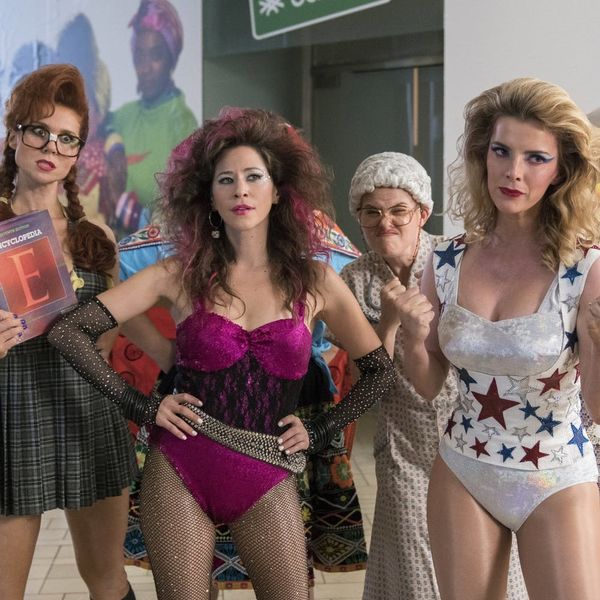 Netflix’s GLOW will return for season 2 in just a couple of weeks, and when it does, it’ll come with a whole slate of new issues — both in and out of the ring — for the Gorgeous Ladies of Wrestling.

When we last saw the women, they were poised for breakout success after filming the pilot for their show. But while fame certainly has its perks, it also has its pitfalls — and it looks like Ruth “Zoya the Destroya” Wilder and her costars are about to learn that the hard way.

Ruth (Alison Brie) deals with sexual harassment and continued tension with her ex-BFF Debbie “Liberty Belle” Eagan (Betty Gilpin), who’s struggling to balance her wrestling responsibilities with the needs of her baby, all while going through a divorce. And Tammé “The Welfare Queen” Dawson (Kia Stevens) faces questions from her son about playing an offensive character.

The ladies also have to cope with overzealous fans and the threat of cancellation when a men’s wrestling show takes their time slot. But they won’t give in without a fight.

“I know what I’m worth, and I’m not apologizing to anyone,” Debbie says in one scene. In another, director Sam Sylvia (Marc Maron) declares defiantly, “I say we do whatever the hell we want to do. Set the weirdos free and see what happens.”

In addition to Brie, Gilpin, Stevens, and Maron, the returning cast includes Sydelle Noel as Cherry Bang (AKA Junkchain), Jackie Tohn as Melanie Danielle Rosen (AKA Melrose), Britney Young as Carmen Wade (AKA Machu Picchu), Kate Nash as Rhonda Richardson (AKA Britannica), Britt Baron as Justine Victoria Biagi (AKA Scab), Sunita Mani as Arthie Premkumar (AKA Beirut the Mad Bomber), Ellen Wong as Jenny Chey (AKA Fortune Cookie), Marianna Palka as Reggie Walsh (AKA Vicky the Viking), Gayle Rankin as Sheila the She-Wolf, and Kimmy Gatewood and Rebekka Johnson as Stacey Beswick and Dawn Rivecca (AKA Edna and Ethel Rosenblatt: The Beatdown Biddies).

Are you excited for GLOW season 2? Let us know @BritandCo!