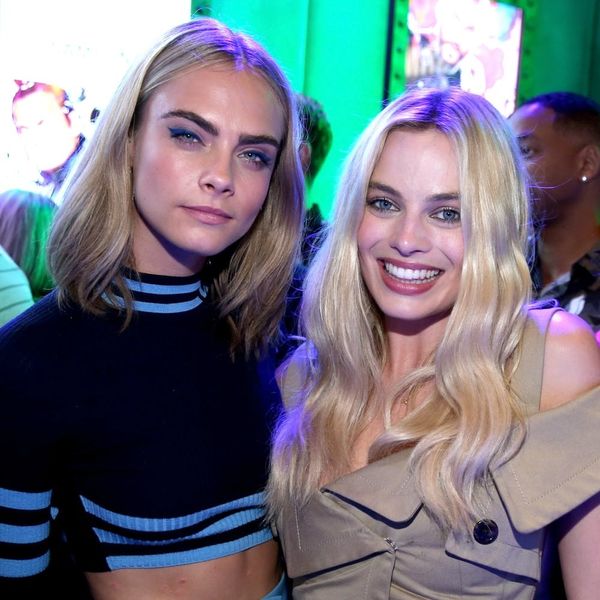 Comic-Con San Diego (an annual convention for all things comic book, fantasy and sci-fi) is going down this weekend, and, if you’re anything like us, you’re only totally jealous that you’re not there, hanging out with all the coolest stars around, who are all on hand to promote their various projects.

Tom Hiddleston, for one, took a night off from cozying up to girlfriend Tay (and from cryptic tweeting) to hang with his Kong: Skull Island crue, while the Scream Queens all but took over the joint, leaving a trail of mischief in their wake. Also making an appearance? Newly single(ish) Lady Gaga, on hand to promote her Monster High collaboration. Check out 12 of their behind-the-scenes snaps below!

1. Emma Roberts: Arguably no one had more fun at Comic-Con than Scream Queens actress Emma Roberts, who posted this hilarious video of her trying to hold the hand of a familiar… erm… thing. “Trying to hold Predator’s hand like…” she wrote.

YOUR BROS ARE ALL CHILLIN AT #SDCC AND SEND LOVE.

2. Brie Larson: Tom Hiddleston’s co-star, Brie Larson, hung with her crew (Tom included) at the event. “YOUR BROS ARE ALL CHILLIN AT #SDCC AND SEND LOVE,” she said, throwing a peace sign up in the background for good measure.

3. Jared Leto: The Suicide Squad got a little naughty — we see that finger, Margot Robbie! — but would you really expect anything less from a group that plays the best bad guys around? *shrugs*

4. Dane DeHaan: Also on the #SKWAD, Cara Delevingne and Dane DeHaan, who had their own fun at panel with their co-stars, director and producers.

Queenin' with my #ScreamQueens #Comicon2016 😻

5. Keke Palmer: The Scream Queens got their whole crew together for the ‘Con, with everyone cozying up in a doll box for added effect. They really do look like dolls, no?

Thank you so much to everyone who came out to support @screamqueensfox this weekend at #sdcc what a fun weekend! 💋 TUNE IN SEPTEMBER 20th on FOX for SEASON 2!

7. Lea Michele: Emma and Keke’s fellow co-star Lea Michele showed her Scream Queens crowd love, writing, “Thank you so much to everyone who came out to support Scream Queens this weekend! TUNE IN SEPTEMBER 20 ON FOX FOR SEASON 2!” We’ll see you then, Lea!

At #comicon and found myself a @klondikebar #yum #winning 😍🐼 #ad

8. Vanessa Hudgens: V scored big at Comic-Con, as she herself noted with the caption for this photo, saying, “At #comiccon and found myself a #klonddikebar #winning.” It’s the little things?

9. Christina Milian: The Rocky Horror Picture Show cast (minus one Miss Laverne Cox) reunited in San Diego to promote their new show, which finally has an official air date: You can catch it on Fox this October 20.

The Born This Way Foundation partners with Mattel's @MonsterHigh to create a doll for kindness! #kindmonsters @btwfoundation @comic_con #SDCC2016

10. Lady Gaga: Apparently, Mother Monster was too excited about the release of her Monster High doll to pay much attention to her video quality, but she posted it to her page anyway, saying, “The Born This Way foundation partners with Mattel’s @MonsterHigh to create a doll for kindness!” It’s a sentiment we can certainly get down with.

One of my favorite photos of all time.. @johnstamos @praisethelourd

11. Taylor Lautner: Taylor Lautner, Billie Lourd and John Stamos got a little goofy at the con, posing for what Taylor says is “one of [his] favorite photos of all time.”

12. Lupita N’yongo: Lupita and her crew used the convention as an opportunity to announce their participation in Marvel’s upcoming Black Panther film, set to debut in July of 2018. “The secret is out!” she wrote on a subsequent post.

Which crew were you most excited to see at Comic-Con? Tell us @BritandCo!

Nicole Briese
Nicole is the weekend editor for Brit + Co who loves bringing you all the latest buzz. When she's not busy typing away into the wee hours, you can usually find her canoodling with her fur babies, rooting around in a bookstore, or rocking out at a concert of some sort (Guns N' Roses forever!). Check out all her latest musings and past work at nicolebjean.com.
Instagram Roundup
Celebrity News
Instagram Roundup
More From Celebrity News