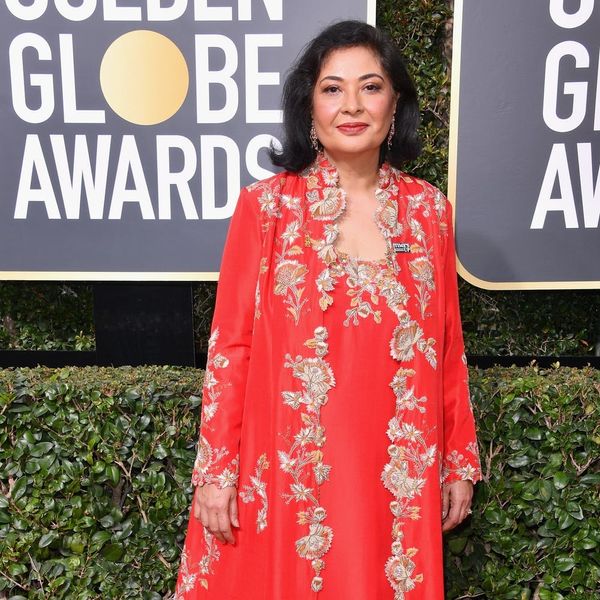 Aside from the empowering speeches and powerful red carpet discussion, few things were more striking than the sea of all-black fashion at the Golden Globes this year. In fact, only three attendees showed up in different colors, and one of them, Hollywood Foreign Press Association president Meher Tatna, has explained why she instead wore red to the ceremony.

Tatna was interviewed by Entertainment Tonight ahead of the show and told reporter Kevin Frazier her reasoning behind choosing an embellished red gown with a matching jacket. The Mumbai native explained that “it’s a cultural thing,” adding, “My mom and I planned this together a couple of months ago… When you have a celebration, you don’t wear black. So she would be appalled if I were to [have] worn black. And so this is, for my mom.”

But just because she chose to wear red instead of black, Tatna showed support for the Time’s Up movement by donning the pin designed by Reese Witherspoon and Arianne Phillips that so many attendees wore as well. “I do have my Time’s Up button, so [I’m] standing in solidarity with all these other women,” she explained. “The HFPA is 60 percent women, we’ll have our stories. We are also journalists, so anybody who expresses themselves, especially on this topic, we are in solidarity with.”

Apparently, Tatna is not the only attendee that stepped away from the color choice. Supermodel Heidi Klum did wear black, but expressed that she would have also chosen red.

“I knew from the beginning that, all women were going to wear black today to celebrate women and to stand up for women’s equality and girl power. So, I’m obviously all into that and I want to be part of it,” Klum told InStyle.

“So, it wasn’t a hard choice to pick black even though I would’ve picked red if someone would’ve asked me, I would’ve made all the women to wear red because I think it is the strongest color. For me, it’s the most powerful color and it means love and all that at the same time. But I guess we’ll all look good in black, right.”

What do you think of Tatna’s explanation? Share over @BritandCo.

Arielle Tschinkel
Arielle Tschinkel is a pop culture junkie who went to NYU because the Olsen twins went to NYU (really). She is a freelance writer whose work has also been featured on HelloGiggles, Refinery29, SheKnows, Bustle, Hollywood.com, and many others; and she's living her dream one Britney Spears GIF at a time. Follow her on Twitter @mrstschinkel or visit her website at arielletschinkel.com.
Celebrity Style
Celeb Style
Celebrity Style Golden Globes Red Carpet