“Grey’s Anatomy” Recap: “Ain’t That a Kick in the Head” 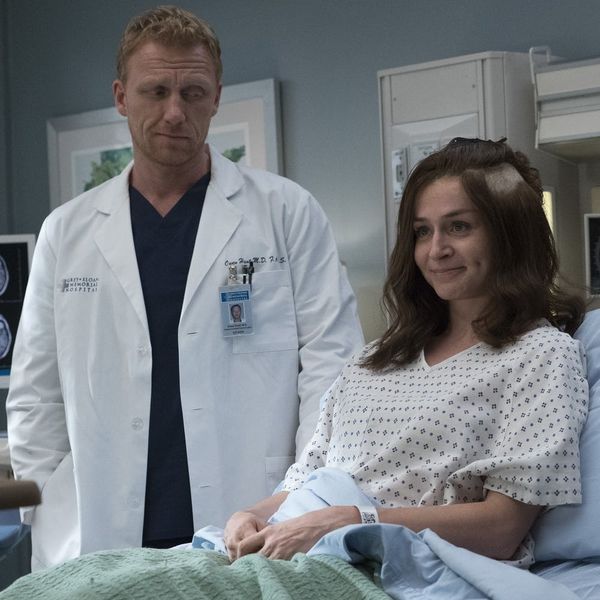 Now that everyone knows about Amelia’s tumor, things are about to get tough on Grey’s Anatomy. And by tough, I mean emotional. This is Grey’s, after all! We start right away with Amelia’s surgery, which is scary enough. And since Amelia is a doctor who knows all the risks of surgeries like this, she makes some last-minute provisions, like telling Maggie to take her room if she comes out with no brain activity, and making April power of attorney if things go south.

Spoiler alert: Amelia lives! But there are complications. When she wakes up, at first she can’t speak, and when she wakes up again, she’s just in a lot of pain. Richard offers her medication, but given Amelia’s history with addiction, it’s a difficult choice to make: Stay in intense pain, or risk getting addicted again? And then there are other issues — she’s speaking only in French (good thing Meredith is there to inform everyone the Shepherd kids all took special classes) and thinks Derek’s still alive. (She does claim later that she “just forgot,” but do we believe that?)

After Amelia is cleared to go home, she wants to check her scans because she thinks there’s still something wrong. Although she’s told she’s fine, DeLuca offers to stay with her. But the thing that Amelia thought was missing? It’s her tumor. I hope this Amelia tumor story line is mostly over, and we can focus on something a little more interesting, because we’ve done tumor stories 10 times over and Caterina Scorsone really deserves something better to play with.

Meanwhile, Megan is mostly recovered from her surgery, but she still technically needs medical attention. She pulls her tubes out trying to leave, though, because she’s worried about her son. Owen can’t talk her down, but Meredith can, by telling her a story about how she kidnapped her own child.

Speaking of Meredith, she asks Avery to remove his name from her article about Megan’s abdominal transplant procedure so she has a chance of winning a Harper Avery. She does want to include Jo’s name, though, and Jo promptly freaks out because it means that her husband could find her.

Meredith has also been ignoring calls from Riggs, and when she finally answers, she finds out that Riggs has been looking for medical information. When she gets another text from him, it’s to meet her at the airport. And who has Nathan brought back? Megan’s son! It’s pretty much a done deal for Megan and Riggs at this point, now that he’s done the impossible and brought her son home, which means Meredith is alone once again. But there’s hope for another couple. When Owen finds Amelia checking out, he admits he was going to leave her when she told him she was sick. But he made a vow, in sickness and in health, and that’s what he’s going to continue to vow to do. So instead of going to her sister’s house, Amelia goes home with Owen.

There are some lighthearted moments in the episode too, in the form of Bailey and Richard interviewing new interns for the hospital. And boy, they’re an interesting bunch. From whispering, to talking about how they lost their virginity, they certainly make an impression. I’m interested to see how they all shape up, since we know they’re here for the long haul.

What did you think of last night’s Grey’s Anatomy? Tell us @BritandCo.