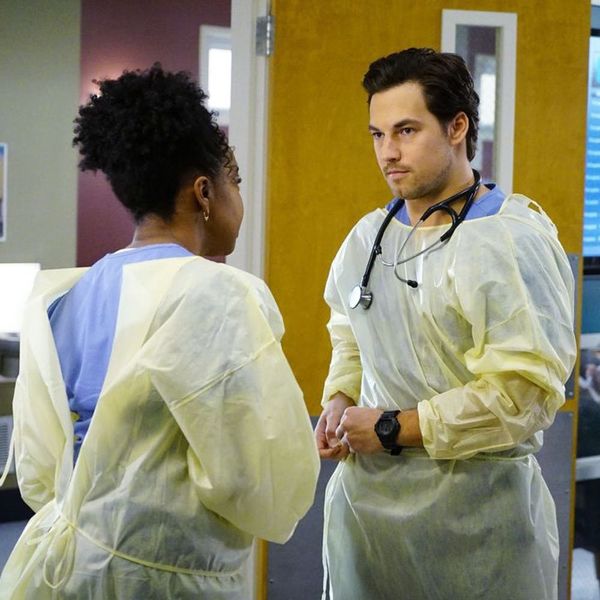 Hey, so, remember Maggie’s mom, Diane Pierce? The one who had breast cancer, but didn’t want to tell her daughter, so she just pretended she was getting a boob job? Yep, she’s back! But she hasn’t told Maggie the truth yet. Her plan is apparently to have the mastectomy and then once she’s in remission, maybe she can do reconstruction. But of course, she isn’t going to tell Maggie any of that until she’s in remission. Jackson respects her wishes, because, well, she’s his patient. But in order to keep his secret, he has to distance himself from Maggie, which makes Maggie a little crazy. I mean, wouldn’t you be a little crazy?

Maggie basically complains to everyone about how her mom doesn’t need a boob job, which Meredith and Amelia find hysterical, not knowing the truth behind the situation, either. But Maggie asks them what to do, because she really wants to talk to her mom about it. Meredith tells her she should demand an explanation, but Amelia goes the other way. (Naturally.) Maggie says she can’t demand things of her mom because it ultimately was her own body, but Amelia’s speaking for herself and her relationship with Owen. (Or, lack of relationship?) See, Owen had demanded that Amelia tell him whether or not she wanted to be a part of their marriage, and Amelia thought that was bullying. She thought he wasn’t in the right to make demands and force her hand in the decision, which ultimately led to their huge rift and confrontation.

"I was already an amazing mom, Owen. For better and for worse." -Amelia #GreysAnatomy pic.twitter.com/OaZ39el4Si

But even though they both blew up pretty badly at each other, they (obviously) didn’t mean what they said. Finally, they got to the meat of the matter: Amelia had already had a child, who had died in childbirth, and motherhood had been terrible to her. Owen didn’t know that she was previously pregnant or that she had lost a child, all he knew was that he wanted kids. And when Amelia ran off, it didn’t give them time to talk about their problems. Maggie takes Amelia’s advice, trying to be supportive, but is left in the lurch when Diane tells her she has cancer. It’s not really her fault, though — Maggie hadn’t given her mom the opportunity to talk, and then had gotten upset at the truth. Her mom and Amelia were just trying to look out for her, but of course, Maggie felt betrayed.

So why had Diane said anything at all? Jackson felt bad about Maggie, not wanting her to be upset, so he had convinced Diane to tell her the truth. Maggie, of course, is angry at Jackson now because she thinks he broke patient/doctor confidentiality, and basically forgets that last time her mom visited, she kind of treated her like crap. But she realizes in the end that she does want to be there for her mom, like any daughter would.

Maggie goes to read her mom’s files, realizing for the first time how bad things are. But she trusts Jackson to help her mom and make her better, and ends up going to Meredith for a sounding board. Meredith is so good to her that Maggie doesn’t even mention she likes Riggs, and Meredith tells her that they’re trying to get on the same page — they were both widows, and they didn’t want to rush anything before they were ready. Maggie finally gets that her sister likes this guy, which I guess it’s about time, considering everyone else knew that.

"Okay, so you should ask me out to dinner." -Meredith #GreysAnatomy pic.twitter.com/CMm0K1mOqf

What else happens? Well, good ol’ Richard comes around when he finds out Arizona is interested in Minnick. He cares about Arizona, and wants to work through his own issues without hurting her. Oh, and DeLuca admits he loves Jo. Uh… what?