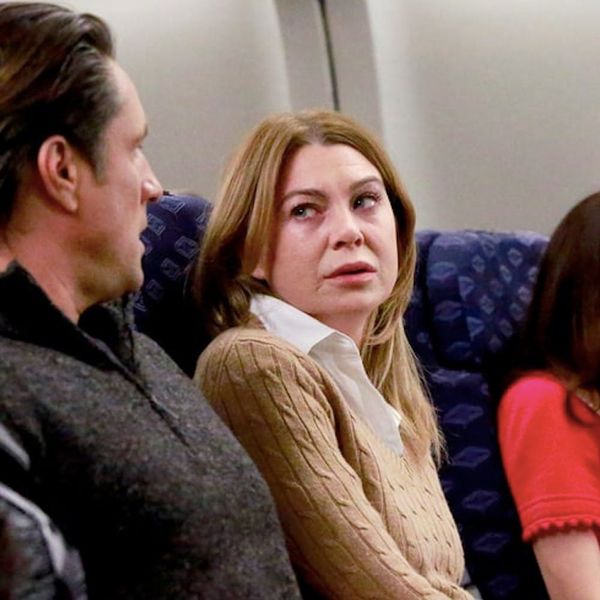 Screwed is how we start this episode, because that’s what Meredith feels when she gets on a plane to attend a conference…only to find Riggs on the same plane, attending the same conference. Meredith is still angry about how he acted during Maggie’s mom’s death, but Riggs is still trying to make it work. (Bless his heart.) He figures maybe the weekend is fate after all, and tries to use that to his advantage…especially because they’e on the same plane and have the time to talk. It’s not like they can go anywhere. You really gotta hand it to Riggs. Even after all of this, and after knowing how Meredith felt about Derek, he’s STILL TRYING.

But Meredith is still convinced they have nothing, and that they never had anything. Unfortunately, she gets trapped more or less in the bathroom of the plane when he follows her, and she’s forced to confront him and her feelings. And…because this is Grey’s Anatomy, those feelings end in impromptu sex. Because, hey… why not join the Mile High Club? I mean, at least they didn’t feel bad about it.

Of course, all this sex happens before they return to their seats and experience insane turbulence. I mean, yes, planes are bad in Grey’s Anatomy world, but give this girl a break. SHE LOST HER SISTER IN A PLANE CRASH AND ALMOST LOST HER BEST FRIEND. Thankfully, the turbulence evens out, and although a lot of people suffer injuries, they’re small injuries that Meredith and Riggs (the two insanely talented doctors, of course) are able to fix easily. At least, until one passenger starts to have a brain bleed. Meredith tries to get the pilot to land the plane with a medical emergency call, but the pilot couldn’t because it was too dangerous to land between the storms they were flying through (what had accounted for the turbulence.) What to do? Surgery on a plane, of course!

To enter or to not enter the Mile High club? #GreysOnAPlane pic.twitter.com/XENocXD0Hw

Riggs, like most people, acts normally and is against this idea. Why would you put your patient at further risk? But Meredith, good old Meredith, she just ignores him and goes ahead with surgery anyway, even while the turbulence is still an issue. She uses a needle to puncture his head (repeatedly! Talk about ouch) and tries to remove the pressure that way, since she doesn’t have any tools. And with Riggs having to help another patient in jeopardy, Meredith is forced to rely on people she just met to help her.

And THIS is where I am cheering for our badass doctors to save this man’s life like I am watching a freaking game of sports. #GreysAnatomy

And it causes her to realize that the reason she doesn’t want to be with Riggs is because she’s scared, and still trying to say she’s married to Derek because of that fear of moving on. But Riggs made her confront that fear, and Meredith’s anger was a result of that. Being separated on the flight and having to help different people allows them to be alone even though they’re still in the same space, and allows them to focus on things other than themselves. So when Meredith asks Riggs for help with her patient as he’s trying to save his own, he tells her that she can handle things without his help, because he believes it. He’s seen Meredith act professional and do her job better than everyone else. He knows she can figure out a way to get through this.

When Meredith Grey is saving your life. #GreysAnatomy #GreysOnAPlane pic.twitter.com/6H1arMwqLt

And she does. She uses a nail clipper to get deeper into the brain, uses a straw to help relieve the pressure, and right as everything is finally getting better, the pilot lets them land. And things are better with Meredith and Riggs, too — not perfect, by any means, but Riggs finally admits he likes her and Meredith is finally open to seeing where things go with their relationship…especially now that they’re on vacation together.