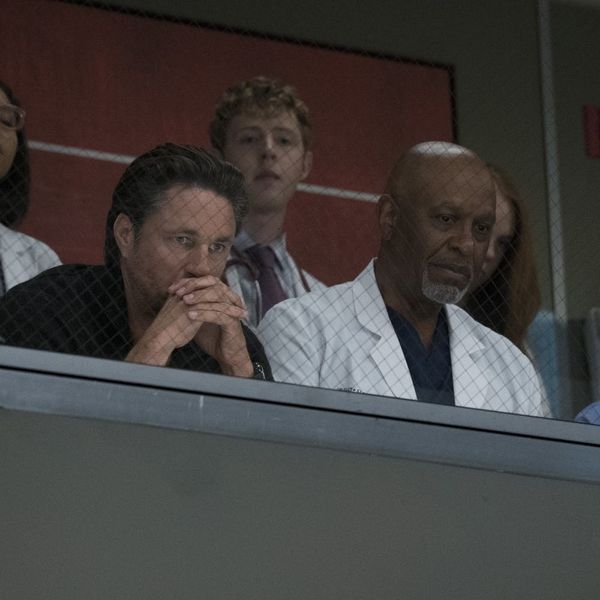 Grey’s Anatomy is in its 14th season now, but as last night’s premiere proved, there’s still plenty of soapy drama to go around. The episode, a super-sized double feature (of course), was a pretty good dose of Grey-Sloan Memorial feelings… even if the tone (up until those last few minutes, at least) was quite different than the heaviness we’ve come to know (and love) from Grey’s over the years. There were a few more light-hearted moments than usual, and all of the characters seemed to actually be having fun. Which is certainly a change from where we left all of our favorite doctors in May.

When we last saw the hospital, it had been literally blown up in an explosion, and Meredith was telling new boyfriend Riggs that his fiancée Megan, who was believed to have died in a helicopter crash years ago, was actually alive. Megan, as it turns out, is doing pretty well for someone who was held hostage for 10 years. Apparently because she was a trauma surgeon, her captors wanted to keep her alive so she could work for them. That’s not really the big bombshell, though. While she was there, she more or less adopted an orphaned Syrian refugee. But since she was never able to legally adopt him, he couldn’t come to the US, and all she wants to do is be reunited with him. And there’s more: Megan also has an abdominal injury (from a bombing) that hasn’t healed properly, so it’s kind of hard for her to go back to Iraq.

Enter Meredith Grey, the best surgeon for the job. It’s a little awkward watching Megan and Meredith fumble around each other, but then we remember that Megan doesn’t know Meredith is (or was?) dating the guy who is technically her fiancé. Since this is Grey-Sloan, everyone is going to lie about their relationship to Megan… everyone except Teddy Altman, that is. Yes, the wonderful Teddy (Kim Raver) is back! She arrives and basically takes charge like the awesome person she is — she talks Owen down from a panic attack over potentially losing Megan again, and then confronts Meredith about being honest with her patient about her relationship status. She even shuts down Amelia’s attempts to defend her sister. Teddy Altman, guys!

Megan’s not so keen on Amelia, anyway. Sure, Amelia’s busy trying to prove an inoperable tumor is operable, but that doesn’t stop Megan, Teddy, and Owen’s mother from confronting Owen about his relationship. I mean, the guy had a panic attack and his wife was nowhere to be found! And his sister is back from the dead! This is a big thing! Owen eventually confronts Amelia about her abandonment, and tells her he’s worried about her well-being. Amelia loses it, because drama is always around in this hospital. So naturally, Owen deals with this reaction by… kissing Teddy. It’s not his best decision, but Teddy fully understands, because she knows him that well. She’s not going to be mad at him, and she’s not going to let him cheat on his wife.

Meredith finally tells Megan that she and Riggs were an item… and they talk about it like adults! Megan’s not mad! And then they move on to more important things, like surgery. Because that’s where all the drama is. Meredith’s first plan to fix Megan’s injury fails, and after a talk with Alex and Maggie, she goes for plan No. 2 — replace Megan’s abdomen altogether. Seems simple enough, right? If I were Megan, I would freak the heck out over this proposal, but Megan recognizes that Meredith is one bad-ass surgeon and is all for it.

Before Megan goes under, Riggs decides to show his passion by proposing to her. Which is nice, until Meredith walks in on them right as they’re getting to the good part. Good thing there’s a donor for Megan’s abdomen, so they can rush to the operating room and avoid talking about it! The surgery ends up being successful, but Riggs is upset because Megan turned down his proposal thinking he’s still in love with Meredith. And, well, Meredith’s made it pretty clear that she can’t be anything more to Riggs than she already is, because she’ll forever be in love with Derek. Poor Riggs.

Amelia’s not the first Grey’s doctor to have a brain tumor, so this seems like a little bit of story line déjà vu. Then again, there’s bound to be some of that in 14 seasons. I don’t buy that Amelia’s strange behavior was due to this discovery, but we all know what’s probably going to happen: She’s going to keep her secret from Owen, and things will get even more complicated.

Welcome back, doctors. It’s good to have you.