How to Treat Every Type of Insect Bite and Sting 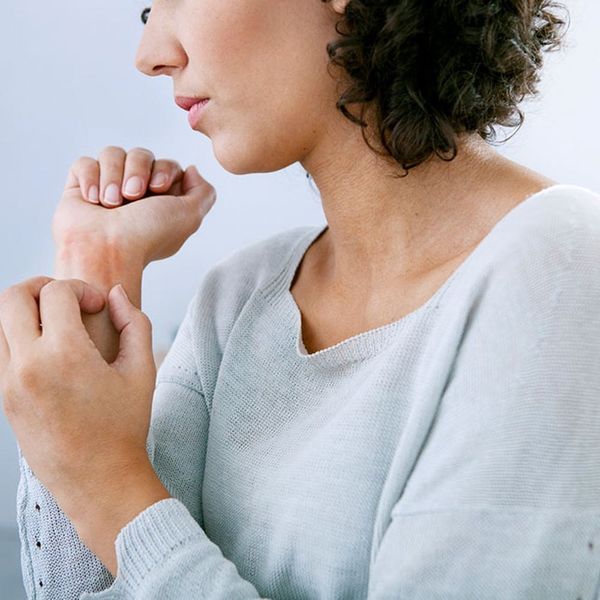 You’ve just sunk into your cool sheets after another gloriously warm day when you hear the unmistakable buzz of a mosquito getting closer in the dark. And then the itching starts. In the summertime, bugs that have been hiding all winter come outside in full force — and we’re on the menu. Most of them are just annoying, but others can be a cause for concern. Here’s how to recognize different types of bug bites and stings and how to treat them.

1. Bees and Wasps: When a honey bee stings you, its stinger comes out in your skin. Don’t use tweezers or your fingernails to pull it out; that will just squeeze more poison into the wound. Instead, gently glide the edge of a credit card or your fingernail over the area to scrape the stinger out. Wasps, meanwhile, can sting you as many times as they please.

Mild reactions to both types of stings will leave you with a pale bump with a red dot in the center. Dr. Heather Hawthorne, a San Francisco-based family practice physician at Doctor On Demand, explains, “All insect bites and stings trigger a similar type of inflammatory response, so regardless of what gets you, wash the area with soap and water, and then quickly apply an ice pack for 20 minutes. Ibuprofen and ice should be sufficient for pain and redness, while antihistamines usually do a good job of controlling any itch.” She also cautions us to watch for signs of secondary bacterial infections, which usually occur three to five days later, and include pus, red streaks, or increased pain. If you notice any of this, seek medical attention.

It’s possible to have a stronger reaction to a bee or wasp sting, characterized by a very red sting site and swelling in the surrounding area that worsens over the next 48 hours. This can take five to 10 days to go down, but it doesn’t necessarily mean that you’re allergic to bee or wasp venom or that you’ll have the same reaction or worse if you get stung again. But it’s a good idea to ask your doctor for an allergy test, just in case.

2. Fire Ants: One minute you’re lying out on the perfect patch of grass; the next your skin feels like it’s on fire. Fire ants live in the warmth of California, Arizona, and New Mexico, as well as throughout the southeastern United States. They build big mounds in open, sunny areas (like lawns, playgrounds, and golf courses) and defend them aggressively.

In a normal reaction, the spots where they’ve bitten you will initially itch or burn, as the name implies. Try not to scratch, since this can open the wound and make it susceptible to infection. Within eight to 24 hours, you’ll start to see small red mounds with white dots, like tiny blisters.

Treatment is similar to that for mild bee and wasp stings: Ice the skin for 15 minutes on, 15 minutes off; elevate the area where you got stung in order to reduce swelling; and for the itching, take an antihistamine or use a hydrocortisone cream. As with bees and wasps, some people might have more severe localized swelling, and again, while this isn’t necessarily a sign of a severe allergy, it’s a good idea to visit a doctor after you’ve taken the initial precautions if this is the case.

A Note About Allergic Reactions: A small percentage of people are strongly allergic to insect venom. About three percent of adults have a dangerous allergy to insect stings, and about two to three percent of the population is severely allergic to fire ants. In the worst-case scenario, an allergic reaction to insect venom can cause anaphylactic shock. Symptoms include swelling of the tongue and throat, difficulty breathing, a racing pulse, dizziness, hives or other skin reactions, nausea and stomach cramps, and even loss of consciousness. The moment you suspect this is happening, find out if the person who was stung has an epinephrine auto-injector (e.g., EpiPen) and if they need your help to use it — and call 911.

1. Ticks: Ticks, technically arachnids, live at the tips of long grass, where they wait for an animal or human to brush against them. They then latch onto the skin to feed on blood, hanging on for several days before dropping off. Although the most common months for tick bites are May to August, they can also be active on winter days when the ground temperature is warmer than 45°F.

You may get a tiny red bump at the spot where the tick bit you, but it probably won’t itch, and some people might notice redness about one to two to inches around the bite. Because ticks leave no visible (or painful) marks on most people, it’s important to pay close attention. Dr. Darria Long Gillespie, ER doctor and clinical assistant professor at the University of Tennessee School of Medicine, advises, “Wear long sleeves and pants when you’re anywhere with tall grass. Spray DEET, the most common insect repellent, on your shoes and the ends of your pant legs to keep them from biting. When you get back, wash clothing and skin with DEET on it, and do a tick check.”

To remove a tick, use tweezers as close to the skin as possible, and pull in a clean (non-twisty) motion. The body might separate from the mouth, but the mouth alone can’t transmit diseases, and it will fall out by itself. Don’t try to burn the tick off as this might cause it to regurgitate infected fluids into you. Once you’ve removed the tick, keep it in a sealed container to show your doctor so if you do develop symptoms, your doc can test the tick to see what it may have transferred. Wash the area with soap and water, and apply alcohol to prevent infection. Go to the doctor if you can’t get the body of the tick out or if you develop further symptoms.

The tick bite itself is usually not the problem — although some people can have an allergic reaction that causes anaphylactic shock or paralysis. Ticks can spread potentially deadly diseases, including Rocky Mountain Spotted Fever and Lyme disease. Fortunately, Gillespie reassures us, “the chances of a tick transmitting Lyme disease are much lower if it’s been attached for less than 48 hours.” Unfortunately, you won’t necessarily get symptoms until three to 30 days after the bite.

About 70 to 80 percent of people with Lyme disease develop a rash known as a “bullseye,” because it’s characterized by a red dot in the center with a red ring around the outside. You might also get flu-like symptoms, including fatigue, headaches, fever and chills, aching muscles, and joint pain. If this happens, go to your doctor as soon as possible. Antibiotics are successful in 90 percent of cases, but left untreated, Lyme disease can cause memory problems, chronic arthritis, and nerve and heart damage.

2. Mosquitoes: If the heat isn’t keeping you up at night, maybe the mosquitoes are. Infuriatingly, the best approach to bites is to not scratch, since this can open up the scabs to infection. However, there are things you can do that will help: After you’ve washed the bites with soap and water, Hawthorne recommends using “over-the-counter products containing pramoxine, such as Sarna Sensitive lotion ($41). If the itching persists, oral antihistamines such as Benadryl or non-sedating options like Zyrtec work well.”

The most infamous disease spread by mosquitoes is malaria, which can be prevented with malaria pills. But if you’re in the US, the one to be aware of is West Nile virus. According to the World Health Organization (WHO), the incubation period (the time between contracting the virus and showing symptoms) is three days to two weeks, but 80 percent of people experience no symptoms. That unlucky 20 percent get West Nile fever, which displays as, obviously, fever, plus headaches, fatigue, nausea, vomiting, and sometimes a rash and swollen lymph glands. One in 150 cases gets severe West Nile disease, which can lead to paralysis or coma. It can be treated in the hospital (the earlier the better) and doesn’t transfer from human to human.

So yes, insect (and arachnid) bites and stings can run the spectrum from annoying to painful to dangerous. But stock up on antihistamine, ibuprofen, and ice packs; get tested for allergies; and know what the symptoms mean, and you don’t have to let bugs ruin your summer.

Are you that person mosquitoes are drawn to? Share your bug stories and remedies with us @BritandCo.

Brit + Co may use affiliate links to promote products sold by others, but always offers genuine editorial recommendations.