Harry Potter’s Hogwarts Acceptance Letter Is Up for Auction 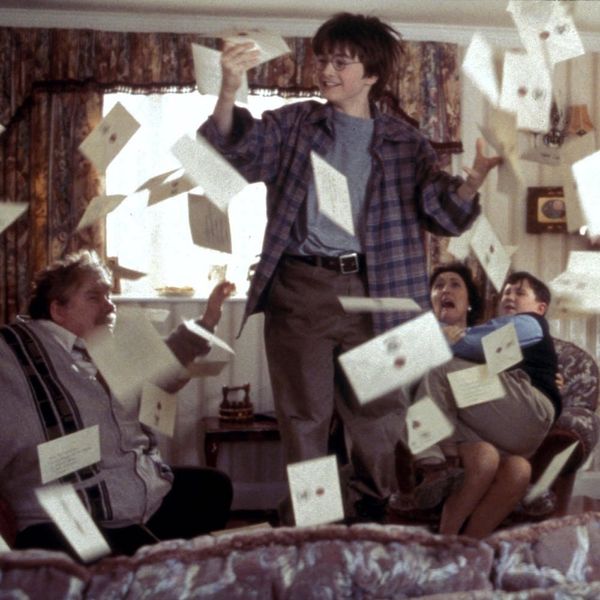 We’ve had fun exploring Hogwarts through Pottermore’s new interactive experience, but we’d still love to get our very own acceptance letter to the storied School of Witchcraft and Wizardry. Seeing as how that’s not likely to happen anytime soon, we’d settle for Harry Potter’s Hogwarts acceptance letter, which is up for auction and can be a part of your magical collection — if you’re willing to pay the price.

The letter — which comes in an envelope addressed in green lettering to “Mr. H. Potter. The Cupboard under the Stairs, 4, Privet Drive, Little Whinging, SURREY” — is being auctioned off by the UK’s Prop Store. It comes with a Hogwarts stamp and an unbroken seal on the back.

While several of the letters were created for the film — surely you remember how the Dursley house was inundated with envelopes — the one currently for sale happens to be the letter that Hagrid hand-delivered to young Harry Potter.

“The hero envelope features a real red-wax Hogwarts seal, unlike the many entirely printed versions that were also used in the scene. The envelope remains sealed with a letter seemingly contained within,” a description on the auction site reads. “The envelope is in excellent condition; the wax seal has cracked and two small fragments are missing, but the Hogwarts crest is still clearly identifiable. Originally sold at a charity auction, the envelope is accompanied by a letter of donation from Warner Bros. and a copy of the letter contained within.”

"RONALD WEASLEY! HOW DARE YOU STEAL THAT CAR?" Calling all Harry Potter fans! Make sure you check out this awesome Ron Weasley's (Rupert Grint) Howler from HARRY POTTER AND THE CHAMBER OF SECRETS (2002), that will be coming up in the #PropStoreLiveAuction! Estimate: £3,000 - 5,000

And it’s not the only piece of Harry Potter memorabilia on the auction block: Ron Weasley’s Howler from 2002’s Harry Potter and the Chamber of Secrets is for sale too. Yep, the very same Howler that Ron’s mom sent after he stole the family car.

While the auction is set to take place in London on September 26, you can bid online from anywhere in the world for your chance to own a little piece of Harry Potter prop magic.

Would you (or someone you know) love to own a prop from the Harry Potter movies? Let us know @BritandCo!