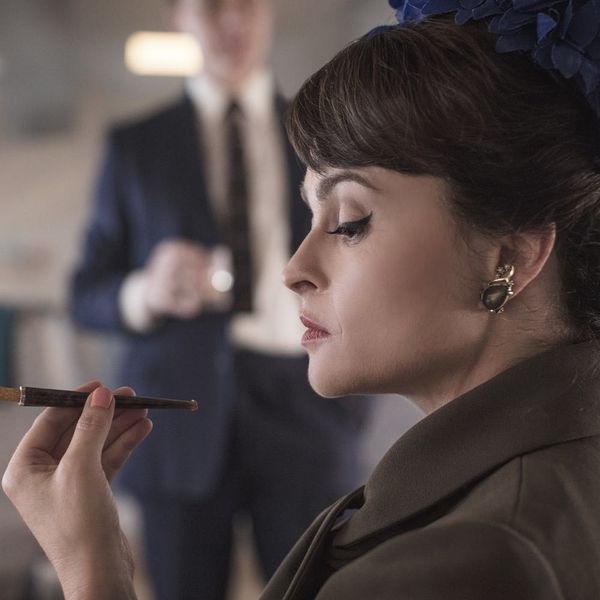 First, the streaming service released a photo of Helena Bonham Carter stoically made up as Queen Elizabeth II’s younger sister, Princess Margaret. The photo shows the controversial royal family member from a moody side-profile angle, clad in a brown coat, dark jewelry, and blue headpiece as she looks down somewhat skeptically at her lit cigarette.

The Crown‘s official Twitter account shared the photo with the caption, “Hope,” mirroring the succinct wording that accompanied the photo of Colman, which said, “Patience.”

Netflix also shared a photo of Ben Daniels as Margaret’s husband, photographer and filmmaker (and commoner) Antony Armstrong-Jones, with the caption, “Hurt.” The dapper creative is seen holding a camera in the still.

Bonham Carter, 52, will be replacing Vanessa Kirby, 30, who portrayed Margaret in the show’s first two seasons. Rumors of Bonham Carter’s casting started circulating in early January, and were later confirmed by Kirby, who said she was “honored.” Daniels is replacing Matthew Goode, who was recently nominated for an Emmy for Outstanding Guest Actor in a Drama Series for his portrayal of Armstrong-Jones.

“I’m not sure which I’m more terrified about — doing justice to the real Princess Margaret or following in the shoes of Vanessa Kirby’s Princess Margaret,” Bonham Carter said in a statement following the official announcement. “The only thing I can guarantee is that I’ll be shorter than Vanessa.”

The Crown season 3 is expected to premiere on Netflix in 2019.

What do you think of the recent cast photos from The Crown? Let us know @BritandCo!