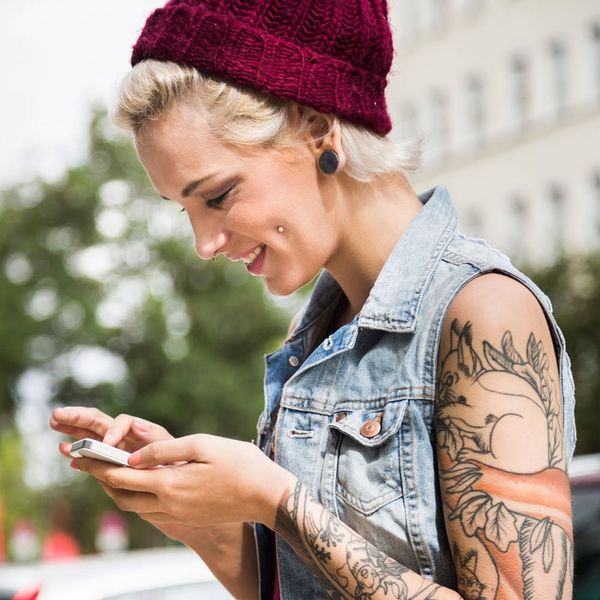 We’ve heard it for years: Getting a tattoo can hinder you landing a job. A March infographic from Skininfo only seemed to confirm the long-standing stigma, with stats that reported 42 percent of people believe that tattoos are inappropriate for work (that’s nearly half!) and 37 percent of hiring managers would put a tattoo up there as the “third most likely physical trait to limit career potential,” right behind bad breath and piercings. Yikes!

But before you ditch your dream tribute to your son or daughter in favor of a cute temporary, yet not-so-custom model, hear this: Everything we thought we knew about tattoos is a lie.

That’s because a new study by St. Andrews University in Scotland is actually proving the opposite.

192 people with managerial experience were asked to choose job applicants for the hypothetical role of a nightclub bartender. Using image software, these managers were shown the exact same face with one slight difference — one was altered with a neck tattoo, and one was not.

The study found that the managers actually preferred the tattooed neck, rating it as 5.07 (out of a possible 7) versus the non-tattooed face, which was rated at a 4.38, with even higher marks for a tattooed female (5.14) over a non-tattooed one (4.51).

While the ratings did show a reversal when the managers were asked to choose between the same applicants for a more “upmarket” restaurant (4.67 for non-tattoo over 3.38 with), other roles, such as skateboard firm employees, were also viewed positively with tattoos.

The study’s lead, Dr. Andrew Timming, says it really all comes down to the message any one particular company is trying to convey.

“Visibly tattooed job applicants can present as attractive candidates in the labor market, because they can help to positively convey an organization’s image or brand, particularly in firms that seek a younger, edgier demographic of customer,” he said. “Tattoos, especially in pop culture industries such as fashion, are an effective marketing and branding tool.”

With so many negatively stigmatized reports out there, Timming said his findings are important ones.

“The idea that body art can improve job prospects has, until now, been largely neglected,” he said.

But take note: That doesn’t mean you should be reckless with your choices. The same managers who viewed the tattoos in a positive light also said that certain types of tattoos would be deemed unacceptable, including those portraying sexual images, related to drink or drugs, supporting facism, misogyny or Satanism.

Are you surprised by Dr. Timming’s findings? Sound off over @BritandCo!

Nicole Briese
Nicole is the weekend editor for Brit + Co who loves bringing you all the latest buzz. When she's not busy typing away into the wee hours, you can usually find her canoodling with her fur babies, rooting around in a bookstore, or rocking out at a concert of some sort (Guns N' Roses forever!). Check out all her latest musings and past work at nicolebjean.com.
study
Style News
study Tattoos
More From Style News