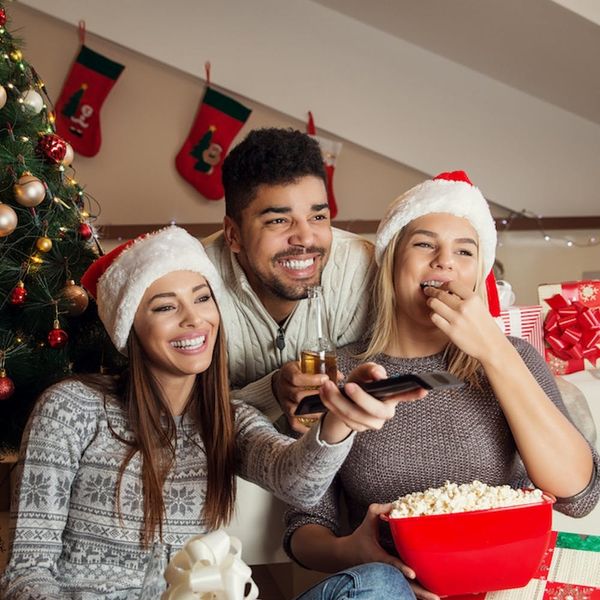 There are a lot of signifiers for the start of the Christmas season: Starbucks’ red cups, obvs, getting your Christmas tree up and stocking the bar for all the festive Christmas cocktails you’re gonna be making.

We know you’ve been watching the Hallmark channel’s lineup of Christmas originals since before Halloween (game recognize game!), and your Netflix queue game is strong, but Christmas is really all about traditions, and there’s nothing like filling the season with viewings of your all-time favorite festive flicks.

Here’s our time, date and network guide for some of the season’s best classic movies and TV shows.

9pm — Elf (Freeform): A modern classic, but a classic nonetheless. At this point, you can excitedly recite Will Ferrel as Buddy the Elf’s hilarious one-liners along with him.

9pm — Disney’s A Christmas Carol (Freeform): While you really can’t compete with the Mickey Mouse version of this Charles Dickens adaptation, the 2009 animated version with Jim Carrey voicing a BUNCH of the story’s most memorable characters is a must-see this time of year.

12:45pm — Home Alone (HBO Family): It wouldn’t be Christmas without Home Alone. That’s all there is to it. How was there ever Christmas before Home Alone?! This one’s on in the daytime, so get that DVR going.

11:55pm — Rudolph & Frosty’s Christmas in July (Freeform): When you’re stumbling in the door from the office party, throw this animated classic on and be reminded of years and years of warm Christmas fuzzies.

10:20am — Miracle on 34th Street (Starz Encore): A perfect Saturday morning movie. Did you know that the little girl from Mrs. Doubtfire and Matilda starred in a 1994 remake of one of the all-time Christmas greats? She did. And it’s as lovely as the original.

8pm — Rudolph the Red-Nosed Reindeer (CBS): This 1964 stop-motion animated classic is the PERFECT Saturday night watch. Plug in the tree and bask in the season as you settle in for some MAJOR nostalgia vibes.

8pm — It’s a Wonderful Life (USA): Or, if you’re feeling something a little *darker,* another all-time holiday classic and truly a Christmas tradition is on another channel.

9:55pm — The Polar Express (Freeform): Another modern classic a la Elf, this one is a fave because of the amazing Christmasy soundtrack.

5:30pm — Tim Burton’s The Nightmare Before Christmas (Freeform): Is it a Halloween movie? Is it a Christmas movie? Why can’t it be both?

9pm — The Greatest Holiday Commercials Countdown (CW): Okay, this one is a bit of a cheat, but a HUGE part of watching Christmas classics on TV is seeing all of the memorable festive — and sometimes just plain hilarious — commercials. The CW gives you a look at some of the year’s best in this annual special.

8pm — Dr. Seuss’ How the Grinch Stole Christmas (TNT): This one is a test: How much of the Grinch can you recite from memory?

8pm — Home Alone 2: Lost in New York (AMC): The Grinch is only 30 minutes long, so you can tune into the Home Alone sequel for more familiar Christmas vibes right after.

5:30pm — Jingle All the Way (Freeform): Re-watching this one every year really highlights the toy-buying insanity that ensues around the holidays and, sadly, we kind of relish in it.

8pm — I Want a Dog for Christmas, Charlie Brown (ABC): The Peanuts are the kings and queens of holiday specials, and the plot of this more recent 2003 one is ALL too familiar — a kid wanting a dog for Christmas, and learning the hard way what a handful they are.

10:30pm — White Christmas (AMC): The Saturday night the week before Christmas is the PERFECT time for this Bing Crosby classic.

11:30am — Mickey’s Christmas Carol (Freeform): NOW we’re talking! At this point in the season you’re hopefully almost all ready and can spend a cozy Sunday morning at home watching Mickey and Co.

5:10pm — The Santa Clause (Freeform): The magic of this live-action ’90s flick never gets old.

11:30pm — A Christmas Carol (TCM): You’ve already taken in the Jim Carrey version and of course the Mickey Mouse classic, so now you’ve got to do your Christmas duty and watch the 1951 original.

2:45am — Little Women (TCM): Since you’re staying up way too late watching A Christmas Carol, why not keep going?

12am — Home Alone: The Holiday Heist (Freeform): While this made-for-TV fifth installment in the series isn’t near as amazing as the original(s), we’ll stick with the theme and check out yet another Home Alone as we barrel into the holiday weekend.

10:15am — Scrooge (TCM): Okay, chances are you’ve got a lot to get done on Christmas Eve. But that doesn’t mean you don’t have time to watch the 1970 musical version of Scrooge. Especially because…

11:55pm — Scrooged (Freeform): After you’re home and all your chores are done and you’re waiting for Santa, the ’80s Bill Murray version is on.

6pm — A Christmas Story (TBS): Merry Christmas! The TV gods have saved one of the most best Christmas movies for the big day itself. Take a minute to spend some time with Ralphie and friends as you ease into your Christmas evening.

8pm — Happy New Year, Charlie Brown (ABC): You didn’t think we’d leave you high and dry on Boxing Day, did you? It might be a bit early for New Year’s celebrations, but Charlie Brown and co. will give you something to watch while you collapse from shopping sales all day.

8pm — iHeart Radio Jingle Ball 2016 (CW): And if you’d rather something a little lighter with familiar faces and festive music, check out iHeart Radio’s Jingle Ball.

What’s your favorite Christmas classic? Let us know over @BritandCo!