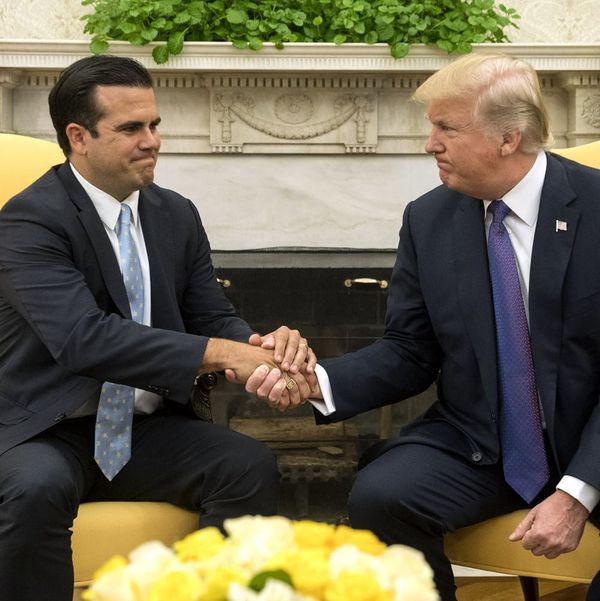 It’s hard to keep up with the news. Here are some of the highlights (or lowlights) from the White House this week.

It all started when Florida Democratic Representative Frederica Wilson alleged to have heard Trump tell Myeshia Johnson, widow of a US soldier killed in Niger: “But you know he must’ve known what he signed up for,” more than once on a phone call. Wilson said she was in the car with Johnson at the time, and that the call was on speakerphone.

Needless to say, the alleged remark didn’t go over well. The president went on Twitter to state that Willson had made up the story, and that he had proof of the fabrication.

Democrat Congresswoman totally fabricated what I said to the wife of a soldier who died in action (and I have proof). Sad!

But later, during a White House press briefing, press secretary Sarah Huckabee Sanders admitted that Trump, in fact, has no proof to support his claim that Wilson lied. But, she added, while the White House has no recording of the call, Trump’s remarks were “taken very far out of context by the media.”

Then, White House Chief of Staff John Kelly stated that he had coached president Trump on how to speak with Johnson, offering Trump advice based on what he had been told after his own son was killed while in the military: “He was doing exactly what he wanted to do when he was killed. He knew what he was getting into by joining that one percent. He knew what the possibilities were because we were at war.” Despite Trump’s public accusation that Wilson had lied, Kelly confirmed that the Representative’s statement about the call was aligned with Kelly’s own advice to the president.

A month after maria, trump met with the governor of puerto rico

A month after hurricane Maria hit Puerto Rico and devastated much of the island, most people in Puerto Rico still do not have power, and many do not have access to potable water. There are also shortages of food and medicine on the island. The president has been harshly criticized over his response to the humanitarian crisis in Puerto Rico, with many noting that the president promised as much help as was needed for hurricane victims in Texas and Florida, while then stating that government aid “cannot… stay in Puerto Rico forever.”

It was great to have Governor @RicardoRossello of #PuertoRico🇵🇷with us at the @WhiteHouse today. We are with you! #PRStrong pic.twitter.com/Op2xDZxvNc

This week, Trump met with the Governor of Puerto Rico, Ricardo Rossello. Speaking of the response to the disaster, Trump said, “I give ourselves a 10.” Trump then asked Rossello if the government had done a “great job” responding to the hurricane, to which the governor responded, “You responded immediately, sir,” and added that more aid was still needed, according to the Los Angeles Times.

San Juan mayor Carmen Yulín Cruz, who has been outspoken about the government’s failure to respond adequately to the lack of survival necessities in Puerto Rico, tweeted that Trump’s body language during the meeting with Rossello “exudes disrespect.”

Body language is a powerful indicator of respect or lack of it. In this photo, Mr. Trump’s exudes disrespect for the people of Puerto Rico. pic.twitter.com/6F2d2EysS5

Maryland US District Judge Theodore D. Chuang blocked the latest version of the president’s Muslim travel ban after determining that the president’s executive order banning travel to the US from several Muslim majority countries is based in religious discrimination. Judge Derrick Watson, a federal judge in Hawaii, also blocked the ban this week. This is the third time Trump has attempted to pass the ban.

Is anyone else seeing a pattern here? Muslim ban issued, courts strike it down. #NoMuslimBanEver

Immigrants rights group and activists have decried the ban as unconstitutional, and have vowed to continue to fight any version of a Muslim ban.