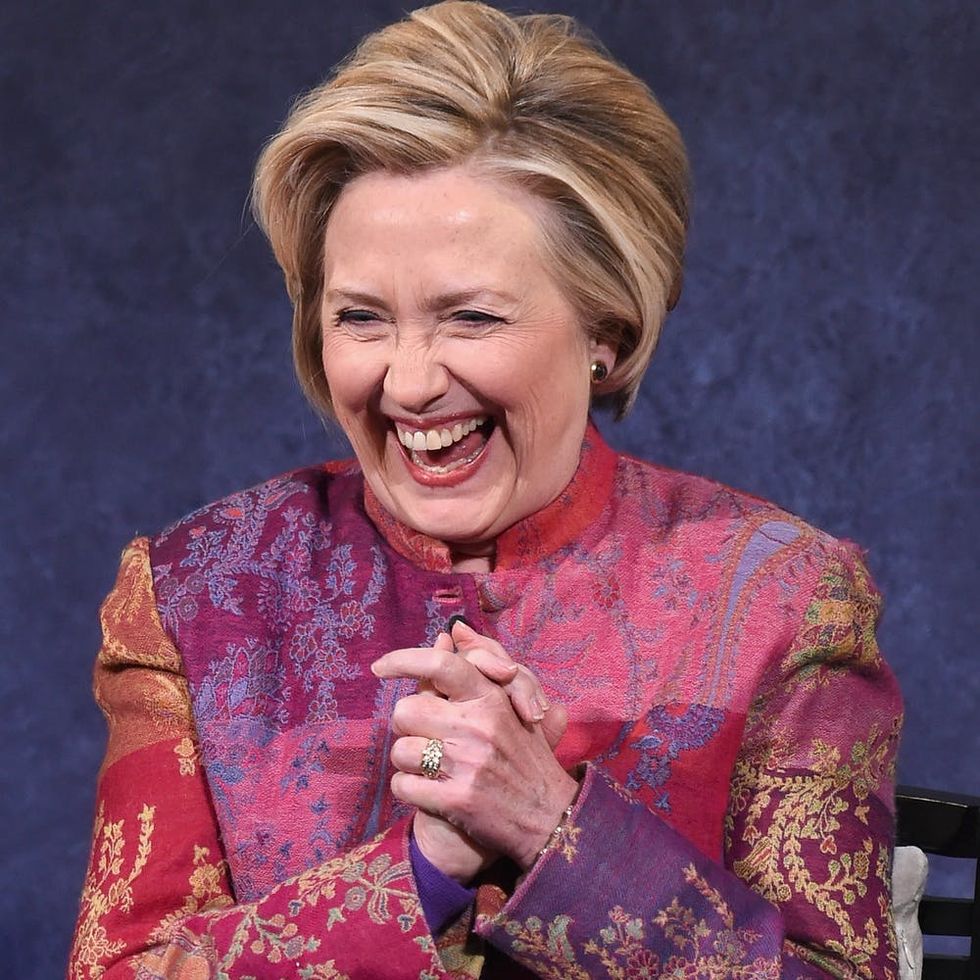 Unsurprisingly, the 2018 Grammy Awards was not without its politicized moments. The words “me too” were on everyone’s lips, and Kendrick Lamar’s powerful opening montage felt like an anthem for the Black Lives Matter movement. But the most high profile politician to actually appear on the program seemed to be more interested in making a joke than a political statement: the one and only Hillary Clinton, who made a surprise appearance at the awards to take a humorous dig at her former rival, President Donald Trump.

In a pre-recorded sketch, host James Cordon explains that he’s holding auditions for a (fictional) 2018 Best Spoken Word Album. He proceeds to parade pop music icons in front of the camera one by one to read from the controversial new Trump biography Fire and Fury: Inside the Trump White House, by Michael Wolff.

“Trump won’t read anything,” reads John Legend. “He gets up halfway through meetings with world leaders because he is bored.”

Cher follows with this enlightening quote from the book: “His combover — semicolon — the product was a color called Just For Men. The longer it was left on, the darker it got. Impatience resulted in Trump’s orange-blond hair color.”

Snoop Dogg is next, the obligatory cloud of smoke drifting overhead.

“Trump did not enjoy his own inauguration,” reads Snoop. “He started to get angry and hurt that the stars were determined to embarrass him.” He stops reading and looks up: “I definitely wasn’t there.”

Rapper Cardi B reads next: “If Trump was not having his 6:30 dinner with Steve Bannon, then, more to his liking, he was in bed by that time with a cheeseburger.”

The next reader starts with the book in front of her face to conceal her identity, but her red pantsuit gives her away, as does the conviction in her voice as she reads.

“He had a longtime fear of being poisoned,” reads Clinton. “One reason why he liked to eat at McDonald’s. No one knew he was coming and the food was safely pre-made.”

Cordon pops on screen as she finishes reading, saying “That’s it. That’s the one.”

“You think so?” Responds Clinton. “The Grammy’s in the bag.”

While the cheering Grammy audience was clearly delighted by Clinton’s appearance, others were less pleased.

I have always loved the Grammys but to have artists read the Fire and Fury book killed it. Don’t ruin great music with trash. Some of us love music without the politics thrown in it.

Getting to read a #fakenews book excerpt at the Grammys seems like a great consolation prize for losing the presidency. #GrammyAwards

Shockingly, the president himself has not weighed in on the matter. One can only assume that he was busy at the time, perhaps with a burger, in bed.

Did you think the sketch was funny or inappropriate? Tell us @britandco.

Lia Grainger
Lia Grainger is a freelance journalist and reluctant nomad who divides her time between Canada and Spain, weather dependent. She's written for The Atlantic, Reader's Digest, the Toronto Star and other print and online publications, and her work appears in dozens of languages around the world.
Grammy Awards
Politics
Grammy AwardsPolitics

20 Hot Drinks Guaranteed to Keep You Fired Up

Holiday Party Pieces You Can Wear Again And Again

These Festive Snacks Are Perfect For Your Holiday Charcuterie

Which Book You Should Cozy Up With, Based On Your Enneagram Type