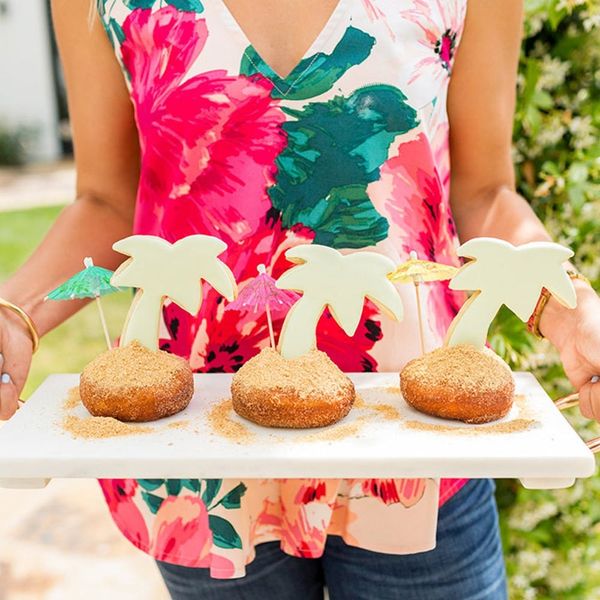 The Hills are alive with drama, fashion, love triangles, picturesque California beaches and a whole lot of cameras. This show, which was one of *the* reality TV shows to watch back in the day, just celebrated its 10 year anniversary. And, yup, we are still just as obsessed with all those So Cal stars. Today, the cast of The Hills is all grown up: Lauren Conrad has been labeled “The New Martha Stewart.” Kristin Cavallari has become a home/parenting icon in her own right. Whitney Port is conquering the fashion world with her own label. Audrina Patridge has just become a first-time mother. They may have moved on, but we haven’t. Recent rumors about the show’s re-boot and/or movie have surfaced, though there is no anticipated time frame just yet. For now, we’ll stick to throwing a complete-series watch party of The Hills in honor of the show’s 10-year anniversary. Scroll down for 11 tips on how to host your own.

1. DIY Floral Champagne Ice Bucket: Okay, your party is already on it’s way to becoming pretty chill, but you’ll need to keep the booze this way too. Therefore, creating a confetti-infused ice bucket for your beverages of choice is a grand idea, to say the least. (via A Bubbly Life)

2. Palm Tree Beach Donuts: Beat the California heat and stay in with your Hills watch party. Your beauty vibe can come from the donuts you serve, while LC gives some serious side eye. (via Lauren Conrad)

3. Palm Tree Theme: The Hills reality series was all about that glamorous, somewhat unattainable California coastal lifestyle, but that doesn’t mean the look is unattainable. Think visions of pink and touches of palm leaf prints when selecting a party color palette and an OOTD that fits your theme. (via Brit + Co)

4. Champagne Gummy Bears: The latest craze is Champagne gummy bears, and a Hills series re-watch party is THE place to try out these adult-intended candies. Just be careful, fights tend to break out in the Hollywood Hills after too many corks pop! (via Brit + Co)

5. Kate Spade New York Confetti Dots Cocktail Napkins in Gold ($15, 40 count): Party planning is all in the details. Keeping with your Gold Coast color scheme, these gold polka-dot napkins are absolutely all glitz and no drama.

7. Macaroon Must: LC always had a sweet tooth, so you’ll be needing something extra sweet to place on those fun party napkins. These pink, gold and palm green macaroons are the ticket. (via Style Me Pretty)

8. Champagne Jello Shots : If you haven’t caught on, this party has a major hint of sparkle. It is Hollywood, after all! Add a fun foodie flare to your re-watch bash with jello shots infused with edible glitter and Champagne. (via 1 Fine Cookie)

9. Chiciata Prism Piñata ($58): Make your guest feel as if they literally stepped from their cars into one of Hollywood’s VIP rooms by hanging some shimmery ceiling swag decorations, like these geometric shapes. Set a few up as the backdrop to your photo booth, and your guests will flock faster than you can say, “photo op.”

10. Generic Hollywood Paparazzi Cutout ($100): There is no The Hills re-watch party without a group of flashing paparazzi. Typically, these sneaky photo snappers are busy taking pictures of LC and the gang, but you can “hire” your own bunch of rowdy photographers. Just remember, if LC taught us nothing else from her reality TV show days, it is to wear waterproof mascara.

11. Vodka Spritzer With Raspberries and Blueberries: Die hard fans of The Hills/Lauren Conrad know that LC’s drink of choice is a simple vodka soda on the rocks. Feel free to add some pretty berries to give the viewing party some extra boost in pink hues. (via Creative Culinary)

Love The Hills or want to plan your own The Hills viewing party? Follow us on Pinterest for more decor, ideas, party tips, and tricks.