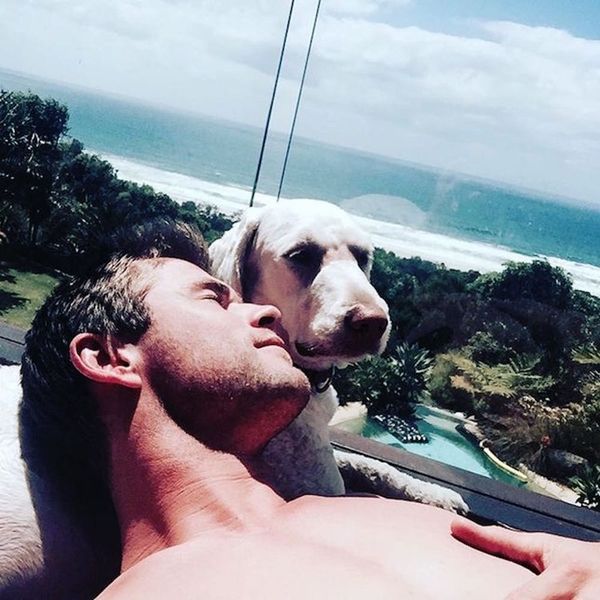 If you’ve ever considered quitting your job and becoming a pet photographer (hasn’t everyone?), than we know you’ll appreciate this. It’s the first day of April, and you know what that means. It’s Hot Guys and Their Adorable Pets Day. Duh. We’ve got a list of some of the hottest male celebs in Hollywood, their strong jawlines and their furry + feathered pals. This Instagram roundup is essentially Magic Mike XXL… minus the dancing and with lots and lots of animals. You’re welcome in advance.

1. Channing Tatum + Smoke: Channing Tatum adopted a rescue horse named Smoke last year and posted this absolutely heartwarming pic of the pair on Instagram. He captioned it: “Meet ‘Smoke’ my rescue horse. He loves beer! We’re meant to be. (To be clear he just loves the smell).” Hotness + talent + compassion too? Aww babe status is off the charts. (Photo via @channingtatum)

2. Liam Hemsworth + Dora: The Hunger Games alum adopted gentle giant Dora last year from Wylder’s Holistic Pet Center and Rescue in Los Angeles with the help of his fiancé (?) Miley Cyrus. It’s clear to see that Liam is over the moon for his canine friend. *BRB melting* (Photo via @liamhemsworth)

3. Chris Hemsworth + his loyal pup: Liam’s brother Thor, er, I mean Chris, lounges here on his Labrador retriever. Whew, look at that view (and we’re referring to the man + dog view, not the ocean one FYI). (Photo via @chrishemsworth)

4. Shemar Moore + his English bulldogs: If this photo of the Criminal Minds actor and his two best buddies in dapper matching fedoras doesn’t make your day, we have bad news. Nothing will. The proud dog dad features his English bulldogs on his Instagram on the reg — oh, and lots of shirtless photos too. Take what you will from that. (Photo via @shemarfmoore)

5. John Boyega + Oluwalogan: The breakout star of Star Wars: The Force Awakens has been a really busy dude lately — because Star Wars — and while the busy actor is on the road, he’s been FaceTiming with his kitty Oluwalogan back home. The actor posted this pic on his IG, writing, “Miss you, Oluwalogan. #hesimplysniffedthephone #hehaseverythingtofightfor #hepeedonthesofa.” (Photo via @john_boyega)

CHECK THESE OUT!THE MOST COMFORTABLE HOODIE ON THE PLANET! Hanging in the grass with my baby girl. AWESOME new ISF hoodies!! Neitzsche not included.. sorry :) http://t.co/GVXaxNaUtn http://t.co/fwXeV4ppeK GET THEM,HELP US CHANGE THE WORLD, BE COMFORTABLE, BE WARM&LOOK GREAT! Thank you.So. Much.

6. Ian Somerhalder + Nietzsche: It’s really no secret the Vampire Diaries actor and his wife Nikki Reed are a pair of the biggest animal lovers. EVER. They’re constantly doing good on behalf of their furry friends — he even has an eponymous foundation dedicated to rescuing animals! The studly actor (and his dreamy baby blues) are spotted here with his pup Nietzsche. (Photo via @iansomerhalder)

7. Ki Hong Lee + Coco: When he’s not busy playing Dong Nguyen on The Unbreakable Kimmy Schmidt, Ki Hong Lee hangs out with his equally cute little friend, Coco the maltese. After all, what’s true friendship if you don’t occasially act as your friend’s dog bed? (Photo via @kihonglee)

8. Trey Songz + Kane Songz: If this photo got any more adorable, the Internet would just break apart and eat itself. Here’s the smokin’ R&B actor posing with his French bulldog, Kane Songz. Kane is totally Instagram famous, by the way, with almost 10,000 followers. (Photo via @treysongz)

9. Zayn Malik + bulldog: Gigi Hadid’s BF isn’t just talented and super sultry, he’s also a serious animal lover. Gigi’s posted pics of Zayn showing love to her late kitty Chubs on her Instagram before, and the “Pillowtalk” singer has also shared a few images of his loving up some animals on his own account — including this one, where Zayn is clearly the more invested one. Aww. (Photo via @zayn)

#RIP Goldie. Thank you for all the eggs, The laughs, the cuddles and happiness. I'll miss you so much as will Georges, Mila, and Carole. Right now, Juliana sobs. I swear, I will investigate Find the culprit & eliminate. Not the best Christmas But the time is one of forgiveness. I am gonna miss you, my little girl You were our favorite pearl. Rip Goldie.

10. Gilles Marini + Goldie: French actor Gilles Marini is really, really ridiculously good-looking (um, remember Dante from Sex and the City?). Okay, now that we’ve stated that fact, here’s a photo of him with his family’s pet hen who passed away. So many tears. (Photo via @gillesmarini)

Are there any hot celebs + their pets we missed? Tweet us @BritandCo!

Kimberly Wang
Kimberly Wang writes about all things pop culture, tech, style, and beauty. She's a Bay Area transplant and has an MFA in Creative Writing from Columbia University. On a sunny New York day, you can find her hanging out with her mini schnauzer Isabelle Jellybean on a blanket in Central Park.
Cats
Pop Culture
Cats Dogs Instagram Roundup
More From Pop Culture