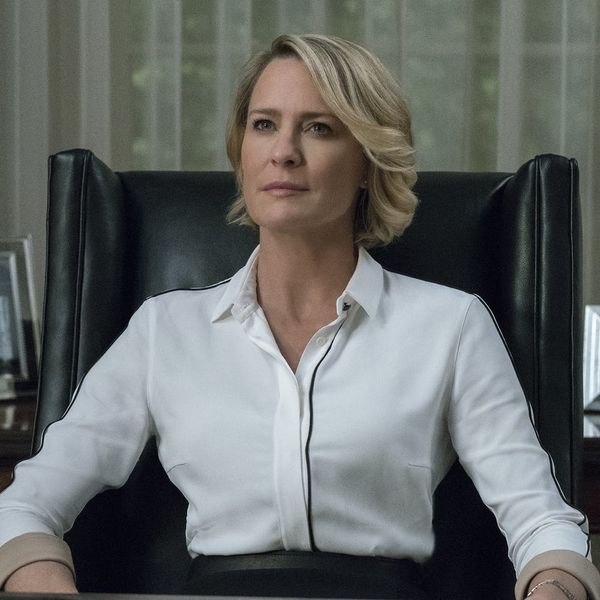 We interrupt your Fourth of July celebrations to bring you this very important message from the new POTUS, Claire Underwood (AKA Robin Wright).

House of Cards teased its upcoming sixth and final season in a brief clip posted to Twitter on Wednesday, July 4. In the video, President Underwood sits in a chair modeled after the famous seat at the Lincoln Memorial. “Happy Independence Day… to me,” she says into the camera, no doubt referencing her independence from her husband, Frank (previously played by Kevin Spacey).

“#MyTurn” then flashes across the screen, taking us back to the moment at the end of the fifth season when Claire broke the fourth wall to utter those exact words after she was sworn in as the 47th President of the United States.

A message from the President of the United States. pic.twitter.com/yx0P3qyHfW

Wright’s character will be the focus of HoC following the departure of the show’s former leading man, Spacey, who was fired after allegations of inappropriate behavior surfaced against the actor.

At the time, a Netflix spokesperson told Gizmodo, “Netflix will not be involved with any further production of House of Cards that includes Kevin Spacey. We will continue to work with [production company Media Rights Capital] during this hiatus time to evaluate our path forward as it relates to the show​.”

Filming on the final season had been suspended while Netflix dealt with the situation, but production resumed in early 2018. At the end of May, Wright confirmed that she had completed shooting. “As of last Friday, we finished filming the final season of @houseofcards,” she wrote on Instagram. “Working with our cast and crew has been an absolute joy. We became a family and I will miss you all and the nonstop laughs! Thank you @netflix & MRC for all of your support through the years!!”

The sixth and final season of House of Cards is expected to hit Netflix in late 2018.

Are you excited for the sixth and final season of House of Cards? Let us know @BritandCo.