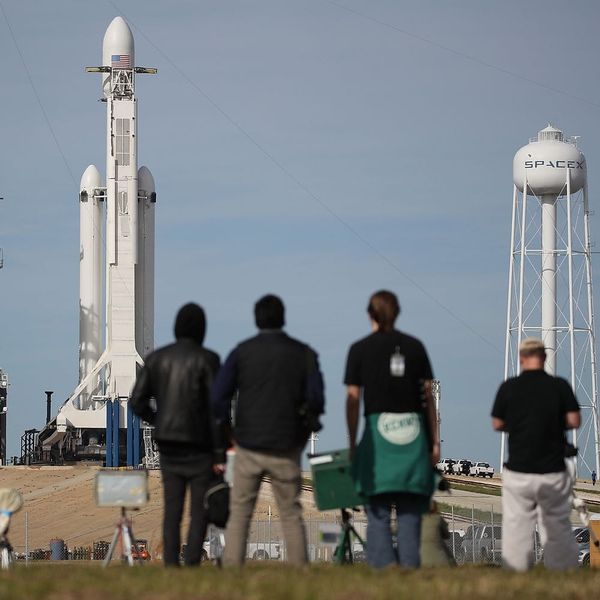 If there’s a space nerd in your life, they’ve likely been talking your ear off about today’s launch of the SpaceX Falcon Heavy. It’s a rocket, and it’s kind of a big deal if you’re into interplanetary space travel. If you’re not, you should be! It’s going to launch today in Cape Canaveral, Florida at 2:20 pm EST (moved from its original 1:30 pm time slot). Nobody really knows what’s going to happen, and you can live-stream it all from the comfort of your cubicle!

For the uninitiated whose interest has been piqued, here’s a little primer on all things Falcon Heavy.

1. Whose rocket is it? Up until recently, launching stuff into space was the government’s job. Not anymore. Tesla founder and space enthusiast Elon Musk created his own private enterprise, SpaceX, in 2002 and has been working since then with the ultimate goal of sending humans to Mars. This rocket is Musk’s baby, and the next step towards shooting a whole bunch of people out into space.

2. What makes this rocket so special? If the launch is successful, the Falcon Heavy will be the most powerful rocket in operation (the rockets used for Nasa’s Apollo moon missions in the ’70s were more powerful). It’s similar to SpaceX’s Falcon 9 rocket, which has been in use for years.

The difference is that the Falcon Heavy has two extra boosters strapped to its sides, which gives it three times the thrust on takeoff. The more thrust, the heavier the load the rocket can launch into space. SpaceX says the rocket is powerful enough to use for a mission to Mars, though they plan to use a different system if and when the time comes to make that trip.

3. What’s the payload? This is a test launch, so, just for fun, Musk decided it would be cool to launch one his cars — a $100,000 Tesla Roadster from his personal collection. Once the first stage of the launch is complete, the Heavy will fire three times to send the car into an elliptical orbit around the sun. The car could come very close to Mars — or even crash right into it, according to the New York Times. It could remain in orbit for hundreds of millions of years.

4. What could go wrong? A lot. The rocket could explode before launch, potentially destroying the launch pad, which could take up to a year to repair. What makes this launch especially tricky is that the rocket has three boosters instead of one, and the SpaceX team does not know exactly how they will interact aerodynamically as the rocket passes through the sound barrier. It could be a rocky ride. Musk told the Times he estimates a two-thirds chance of a completely successful launch, including the safe return of all three boosters.

5. How much does it cost? About $90 million dollars, according to CNN Money. It might seem like a lot, but it’s actually only 45 percent more expensive than the Falcon 9 rocket, and it’s three times as powerful. Other rockets in its class can cost as much as $400 million to launch.

SpaceX has been able to save money by reusing rocket boosters. They are the first and only rocket builder to return its rocket boosters back to earth for reuse. In fact, the return of the boosters is an impressive part of the show that happens later today. If successful, two boosters will land at Cape Canaveral and the third will land on a floating platform in the Atlantic.

6. How do I watch it? See! we told you it was cool! The Falcon Heavy is currently estimated launch at the Kennedy Space Center in Florida 2:20 pm EST, according to the SpaceX Twitter account. You can stream the launch on SpaceX’s website here, or watch PBS’s YouTube live-stream here. There is also a backup launch window tomorrow between 1:30 pm and 4:30 pm if conditions prevent it from happening today.

Will you be watching the launch? Tell us @britandco!

Lia Grainger
Lia Grainger is a freelance journalist and reluctant nomad who divides her time between Canada and Spain, weather dependent. She's written for The Atlantic, Reader's Digest, the Toronto Star and other print and online publications, and her work appears in dozens of languages around the world.
science
Current Events
science Tech News
More From Current Events