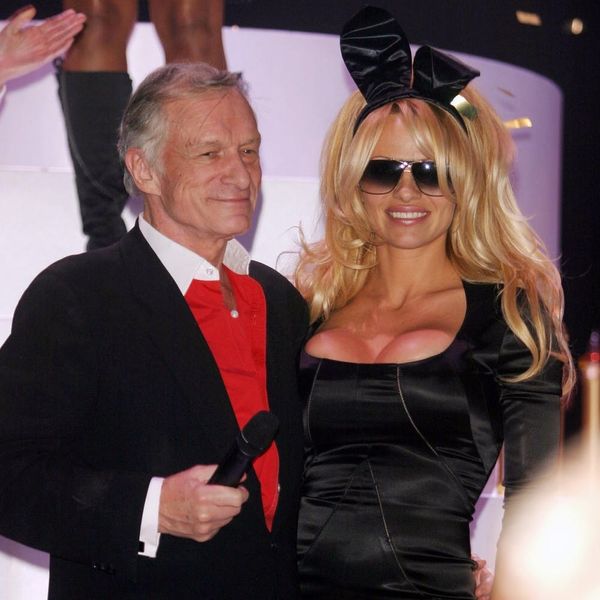 On Wednesday, Playboy founder Hugh Hefner died at 91 years old. And while the publishing giant and his business were often controversial, he was also revered and beloved by many, and tributes from people who worked with or knew him have poured in since his death.

Pamela Anderson, who appeared on the cover of Playboy a record 14 times, posted a particularly moving tribute to “Hef,” as he was known.

“You taught me everything important about freedom and respect. Outside of my family, you were the most important person in my life,” Anderson wrote alongside a video in which she’s seen weeping.

“Everything anyone loves about me is because you understood me. Accepted me and encouraged me to be myself,” she wrote. “You said, I can hear you say — be brave. There are no rules. Live your life.”

Kim Kardashian, meanwhile, tweeted that she was “so honored to have been a part of the Playboy team,” and reminisced with her old bestie Paris Hilton about some of the times they shared at the famous Playboy Mansion. “She texts me the perfect Hef emojis,” Kardashian wrote, using a string of the bunny-eared dancing girl emojis alongside the old man emoji.

Going to miss Hef!😿And yes so many fun times with you at the #PlayboyMansion. 👯 #LingerieParty

Jenny McCarthy wrote that he was a revolutionary not only to culture at large, but also to her life. “Thank you for being a revolutionary and changing so many people’s lives, especially mine,” she wrote alongside a ’94 Playboy cover of hers. “I hope I made you proud.”

RIP #Hef Thank you for being a revolutionary and changing so many people's lives, especially mine. I hope I made you proud. 😓#PMOY 94 ❤️ pic.twitter.com/sF9ARYgEpw

Hef’s Girls Next Doors costars Kendra Wilkinson and Bridget Marquardt also paid tribute, with Wilkinson telling People in a statement, “Hef changed my life. He made me the person I am today. I couldn’t be more thankful for our friendship and our time together. I will miss him so much but he will be in my heart forever.”

Can't really put in to words how I really feel. It's easy to say he will be missed and how much I loved him. There's a lot more than that

So sad but forever grateful for all the wonderful memories and amazing experiences #RIPHef #Playboy 💔 pic.twitter.com/RkHje7h0Un

R.I.P. Hugh Hefner 😥 The American Icon who in 1953 introduced the world 2 Playboy mag and built the company into one of the most recognizable American Global brands in history , I am so grateful I had the opportunity to shoot many Playboy celebrity pictorials with u Hef❤️ thank u for picking me and Bringing me into the magical world of Playboy ! I just can't stop crying and I can't imagine how many bunnies are crying for u too. U are a class act and I will always have gratitude for your kindness 🙏🏼love u Hef #hughhefner #playboy #icon @playboy

Playing bunny Janie on The Playboy Club will always be such a positive memory for me. I made some of my dearest friends. Met Hugh while screening the pilot episode at the Playboy mansion with my dad and he couldn't have been more lovely. RIP🙏🏻

Hugh Hefner was a GIANT in publishing, journalism, free speech & civil rights. He was a true original, and he was my friend. Rest well Hef. pic.twitter.com/bJ1wxoK4gR

According to ET, Hefner will be buried in a Los Angeles mausoleum next to Marilyn Monroe — nearly 64 years after he put her on his magazine’s very first cover.

Tell us what you think of Hefner’s legacy on Twitter @BritandCo.