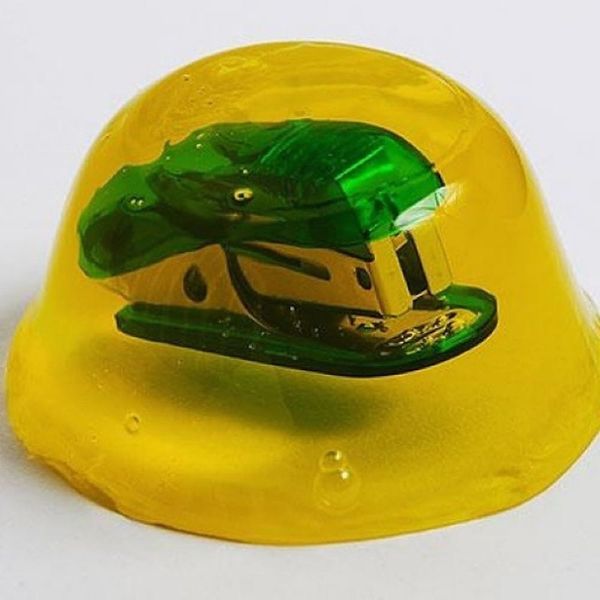 March is coming to a close, and that means it’s nearly time for an *entire* day of pranks, LOLs and poor unsuspecting victims. If you’re still reeling from Bro + Co 2015 and want to make sure you don’t fall prey to those antics yet again, check out these April Fools’ Day pranks from 2015’s Instagram feed. From the toothpaste-filled treats to the silly office jokes, these pranks will make anyone do a double take (or taste!). Pick your favorite one, and get to scheming.

1. Mayo Pudding: Sure, this pudding/mayo swap is all kinds of wrong, but there’s just something about it that feels so right. Make a “vanilla” pudding dessert for an unsuspecting victim. Or go the sweeter route: Fill an empty mayonnaise jar with vanilla pudding, and walk around eating straight from the jar. It’ll totally freak your friends out. (via @tammy_kudrick)

2. Stapler in Jello: If you’re familiar with Jim and Dwight from The Office, than you probably remember the stapler-in-Jell-O prank that started it all. Now you can pull a “Jim” on your co-workers with this classic prank. Don’t worry, the challenge is not so much getting the stapler into the Jell-O, but rather getting it out. Maybe give them a spoon to help. (via @liquidtalent)

3. Mixed Candy: This joke might give someone some serious trust issues. Not really — but it still makes for a good laugh when you see your friend’s confused face after popping what they thought was a brown M&M into their mouth and instead taste a grape Skittle. (via @lauren72090)

4. Brown E: Just imagine the look on your family member’s faces when they rush into the kitchen after you let them know there are brown E’s in the kitchen. Technically, you didn’t lie. (via @joyinthejourney89)

6. Googly-Eyed Food: They’ve got their eyes on you. Prank your family or office by sticking googly eyes on all the food in the fridge to surprise whoever opens the door next for a snack. (via @luvsmenot)

7. Yarning Prank: What a tangled web they wove… of yarn! Surprise your roommate with this yarning prank. Warning: Be on the look out for April Fools’ retaliation! (via @valandco_photo)

8. Free Beer: If only this were true. April Fools,’ why you gotta be so mean? (via @shawtysnap34)

9. Caged: This one’s not for the faint of heart, unless there’s a secret celebrity crush lurking in your friend group. Imagine starting your car and getting ready to reverse when you glance into your rear view mirror and see Nicholas Cage (or whoever) staring back at you. (via @charitymurrell)

10. Honk Prank: This person didn’t know what all the honking was about on their drive to work that day. Your friend won’t either when you surprise them with this hilarious prank. (via @lemindyx)

11. One Coffee Bean: Every coffee-lover’s worst nightmare is running out of coffee — coffee beans included. Fool your friend by pouring out all their coffee beans except one into another zip lock bag. It’s even better if you can watch your friend in the morning while they swear the bag was full just the other day. (via @cozmohollis)

12. Balloons: This prankster may have had too much time on their hands. But you know what? It was totally worth it. (via @ffxtools)

13. Foiled: This guy deserves an award for no f*cks given. Wrap your co-worker’s cubicle and everything in it in aluminum foil for a shiny surprise. (via @jenn_knee_fur)

14. Spiders Under the Covers: If you’re planning on pulling this prank on your S.O., it might be wise to consider the consequences. Dun dun dun. Otherwise, sit back and watch their hilarious reaction. (via @blogging.banshee)

15. Glitter Bomb: This one should be reserved for your worst enemy. As awesome as glitter is, once it gets on you, that stuff stays like no other. April Fool’s Day may be a Friday, but your prankee will still be finding it in their underwear on Monday. Glitter means business. (via @alexisbritt)

16. Toothpaste Oreo Filling: As sweet as peppermint filling can be, toothpaste just isn’t the same. Scrape out the creme filling from Oreos and squeeze out a dollop of toothpaste onto each cookie for a *refreshing* surprise. (via @paleofitkkbnce)

17. Tape Down the Sink Sprayer: This age-old prank still gets people every time. Wrap clear tape around the sink’s side sprayer so it’s holding the button down. The next time someone tries to turn on the faucet, they’ll get soaked! (via @marcdole)

18. Mini Donuts: You’ve probably never seen donuts this teeny tiny. Trick your friends with your own set of seriously MINI donuts using lifesavers, a little frosting and sprinkles. Your friends might forgive you once they learn that they’re actually edible. (via @yummination)

19. Donut Surprise: If you revel in seeing the disappointed faces of your co-workers, this donut prank is a good one. Just maybe pack your own lunch that day, instead of risking a Seamless “mishap.” (via @thegiftedgabber)

How do you plan on pulling off the most epic April Fools’ prank? Follow us on Pinterest for even more April Fools’ ideas.

Grace Lee
Grace is an LA-based freelance writer, documenting her everyday life via her Instagram. She's a fan of spontaneity, individual style, all things Harry Potter, cuddling with her two dogs, and exploring new places. More about Grace can be found on her blog, Girl Meets World.
Creativity
More From Creativity