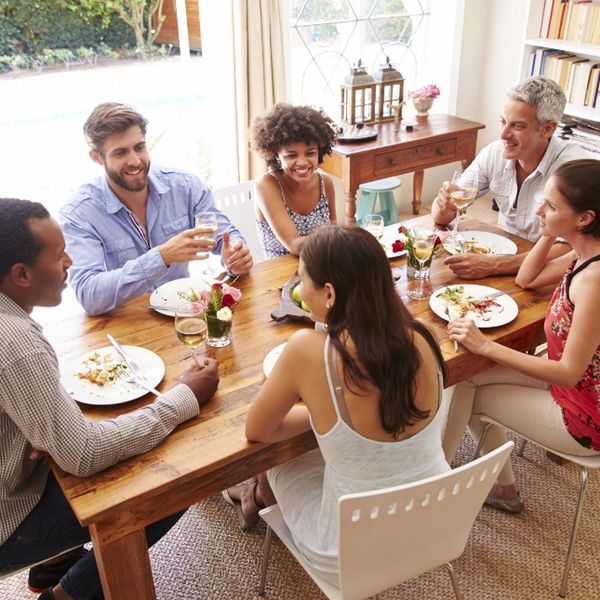 We lovemaximizing creativity. Even as an adult, we believe that there are tons of ways for you to infuse a little outside-the-box thinking into your everyday life (and even hack your creativity while you sleep!). So while our awesome classes (like this *free* intro to ink illustration one) can definitely get you started, a recent study led by researchers at Columbia University found that another way to get your creative juices pumping is to get to know people from different cultures.

While there’s been little official research into the topic before this study, the correlation between intercultural relationships and creativity is actually pretty intuitive: It makes sense that having friends with different life experiences and backgrounds will enhance your perspective on the world. And we can definitely all think of personal examples that fit. The study’s authors cite Steve Job’s relationship with Kobun Otogawa, a Japanese Zen Buddhist, as an example of this phenomenon. After spending time with Otogawa, Jobs incorporated a Zen philosophy of “simplicity” into Apple’s designs — a philosophy that helped lead the company to unparalleled product development success.

The paper cites, per The Economist, that the number of international students worldwide is up to 4.5 million from the two million we saw at the turn of the millennium — with estimates claiming the total will be more than seven million by 2025. This rapid increase in global cultural exchange means that intercultural relationships like that of Jobs and Otogawa will surge as well. The world is essentially shrinking as technology and advanced, cheaper transportation methods make it easier to travel.

Due to this globalization, the study claims, the rising number of people who expose themselves to other cultures will also experience higher levels of creativity. But how? Through cultural learning, which is “the acquisition of new information and understanding about the assumptions, beliefs, customs, norms, values, or language of another culture.” If you’ve ever traveled to a foreign place and learned how to politely eat there, for example, then you’ve experienced cultural learning.

In order to test the creative impact of being exposed to other cultures, the researchers conducted a series of connected studies to try to put numbers to the various effects. One finds a relationship between the length of intercultural relationships and the ability to generate unique names for marketing products, demonstrating that a deep cross-cultural experience can expand creativity in ways that merely making acquaintances or dating people from your own culture does not. Another suggests that intercultural friendships can have the same effect as romantic intercultural relationships: A survey of over 2,000 people who’ve spent time working in the US shows higher levels of workplace innovation among those who, after returning home, maintain ties with American friends.

While the numbers backing it up are complex, understanding the relationship between creativity and intercultural relationships of any kind is simple, even according to the study’s authors: “Going out with a close friend or romantic partner from a foreign culture can help people ‘go out’ of the box and into a creative frame of mind.” If you’ve ever needed more of a reason to get out and travel, here it is!

Gabrielle Gresge
Gabrielle Gresge is a Chicago native and journalism student at the University of Missouri. While not chasing deadlines, she enjoys giving campus tours, exploring her new home, and missing her old one. She loves to write about these experiences in her own handwriting at gabriellegresge.wordpress.com.
Dating
Home News
Dating science study
More From Home News