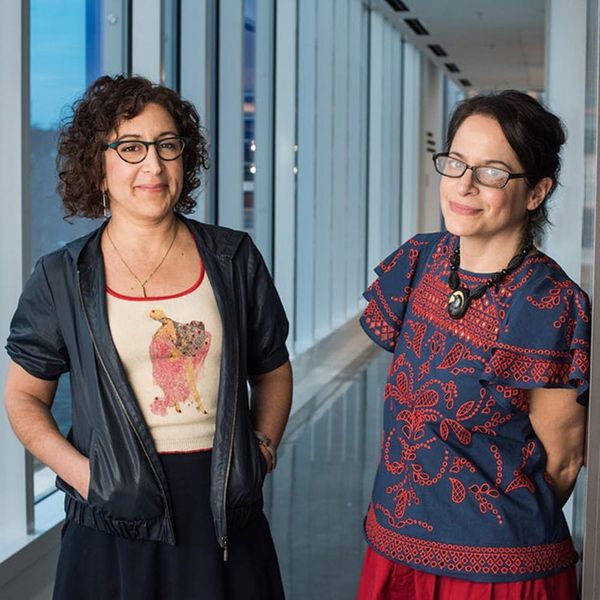 It’s hard enough to try to explain things in the world that we can see, but journalists Hanna Rosin and Alix Spiegel have taken on the additional challenge of trying to explain things we can’t see. Their NPR podcastInvisibilia, which just finished its fourth season, delves into the “invisible forces that shape human behavior.” In it, Rosin and Spiegel explore all the things that make us imperfectly human — emotions, thoughts, societal expectations, cultural norms, and more — and bring them to life in equal parts science and story. It may be impossible to see the inner workings of our minds, but Invisibilia is as good of an attempt as any.

In each episode, Rosin and Spiegel expertly blend these abstract concepts with profiles of real people. Says Rosin, “We read a lot of human behavior and social psychology research to stay on top of the latest trends and interesting ideas.” Past seasons have featured powerful tales about a completely blind man who defied expectations by teaching himself to “see” via echolocation (the method of locating objects by reflected sound), the first all-female debate team in Rwanda who practiced acting confident until they actually started feeling it, and an anthropologist who discovered a new intense emotion (described as “high voltage” running through your body) while spending time with a remote tribe of headhunters.

Season four dives into a number of timely concepts such as the flexible constructs of truth and reality, whether we can truly break free from a history of a certain pattern of behavior, and how reality TV can help shift social norms. There’s an episode, “The Callout,” discussing sexual abuse and the moral codes that both victims and assaulters are held to, which feels particularly relevant in the current climate of #MeToo.

It’s no coincidence that the episodes feel inspired by recent headlines. “It’s hard not to notice how polarized the country is, how strongly we are drifting toward opposing extremes. In that kind of situation, a gray area is an uncomfortable place to be. So yes, the theme for this season comes directly out of current events. We decided to look at how the stories we tell ourselves lock us into these rigid positions. And then see what it’s like for people — and countries — to live outside those narratives,” says Rosin. “Also, the news is offering us a lot of rich material these days, so we look at countries influencing each other’s politics through stories, and how one community treats sexual abusers.”

In the course of their work (each episode can take up to four months to put together), both Rosin and Spiegel have done some unusual things in the name of investigative journalism. “Last season, Alix made one of our producers, Yowei Shaw, feed a bear from her lips. Weird. Also dangerous,” says Rosin. “This season, Yowei knocked on many doors in Taiwan asking about a spy. I went to some hardcore music shows and squatted near the mosh pit while people punched and kicked — though my nose isn’t broken. Also, I jumped out of a plane.”

And listeners aren’t the only ones who can learn surprising things about the world and themselves. Rosin admits, “I learned that I was absolutely terrified of heights to a degree I hadn’t quite appreciated, before jumping out of an airplane in the name of… art.” Spiegel adds, “I learned — through painful experience — about all the things I myself cannot see. In terms of telling a story and being a human in the world.” If there’s one lesson weaved throughout this season’s six episodes it’s that the only thing consistent about human behavior is that it’s predictably inconsistent.

As for a Season five? The duo says, “YES!!! We have lots and lots of ideas brewing.”

For a mind trip in the best kind of way, give Invisibilia a listen. If you need a starting point, try some of Spiegel’s favorite episodes: “The New Norm,” “How to Become Batman,” “The Secret History of Thoughts,” and “The Other Real World.”

What podcasts are you currently listening to? Share them with us @BritandCo.

(Image via Sara Wong and photo via Stephen Voss/NPR)