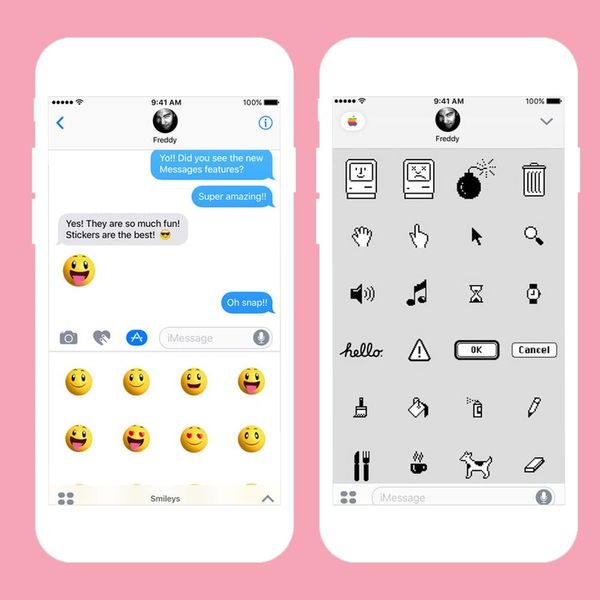 Emoji are the great unifier: They transcend the barriers of text, they enable cross-cultural communication and they’re really freakin‘ fun to use. CHAMPAGNE BOTTLE EMOJI FOR EVERYONE! Which is why Apple‘s new emoji news over the weekend has us super stoked for the future of iMessaging.

Over the weekend, Apple unveiled four new animated emoji packs, available only to iOS 10 beta testers. For the moment, the pictographs are limited. There are the classic smiley and heart stickers, but also a hands pack and a retro “classic mac” pack with smiling computers that we haven’t seen since our childhoods. The packs went on sale in the App Store on Friday night.

Although they aren’t much to look at right now, the pictographs will be open to developers who want to create their own for the masses. The new animated stickers are one of the new iMessage features coming in the fall, and we’re pretty sure they’ll take everybody’s texting game to the next level. When the new iOS is released to us all, we’ll be able to send each other texts with grand entrance effects, doodles and invisible ink. We need a “level up” sticker STAT.

Which emoji are you going to use? Let us know @BritandCo!

Cailey Rizzo
Cailey is a junkie for all things pop culture. She studied journalism and English literature at SUNY Purchase, then continued studying French cinema and literature at Paris IV Sorbonne. She currently lives in New York where she can often be found singing '70s music at karaoke bars.
Apple
Tech
Apple Emoji iPhone
More From Tech