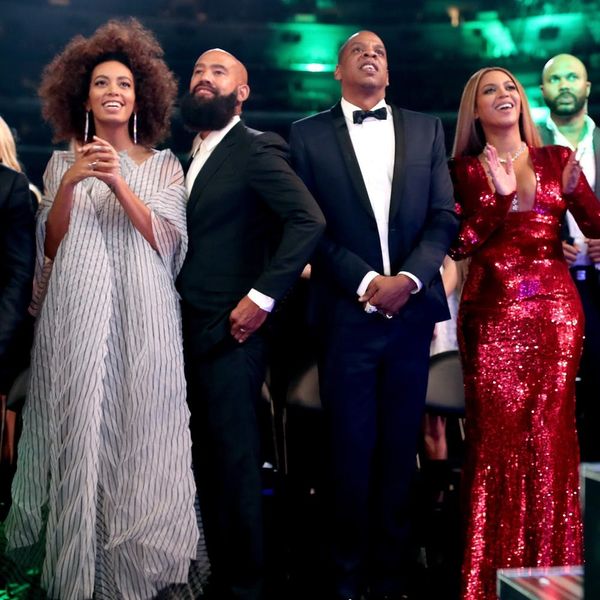 Back in 2014, the Met Gala made headlines for more than just its killer red carpet looks. After the Gala, at a party at the Standard Hotel, JAY-Z and his sister-in-law, Solange Knowles, got into a fight in an elevator. The security footage of Solange kicking and punching him leaked a few days later, and the world has been dying to know what happened ever since. Now, more than three years later, JAY-Z is speaking about the incident in a new interview.

“We had one disagreement ever,” he said on a recent episode of the Rap Radar podcast. “Before and after, we’ve been cool.”

Fans have long speculated over the fight, with most assuming it was related to Jay’s alleged infidelity, which we heard about on Beyoncé’s Lemonade and JAY-Z’s recent album, 4:44. The title of the latter even inspired its own theories after one fan noticed that 444 is the secondary address of the rooftop bar at The Standard — the hotel where the scuffle happened.

On the Rap Radar podcast, Jay went on to assure hosts Elliott Wilson and Brian “B.Dot” Miller that he and Solange have “always had a great relationship” outside of that one incident. “I fought my brothers and argued with my brothers my whole life,” he said. “It just so happens, who we are, these things go into a different space. But it ain’t nothing.”

The infamous elevator fight may have happened in more tumultuous times for Jay and Bey, but the pair have since patched things up and seem like a stronger family unit than ever. In June, they welcomed new twins Sir and Rumi, whose big sister Blue Ivy may even have a budding rap career of her own on her hands.

Neither Solange nor Beyoncé have ever spoken about the fight beyond an initial joint statement they released with JAY-Z shortly afterward, but after Jay’s final words on the matter, we’re not sure they ever need to. “She’s like my sister,” he said of Solange. “I will protect her. That’s my sister, not my sister-in-law. My sister. Period.”

What do you think about JAY-Z’s side of things? Let us know @BritandCo.