This J.Crew Bridesmaid Look Is the Perfect Non-Traditional Wedding Touch 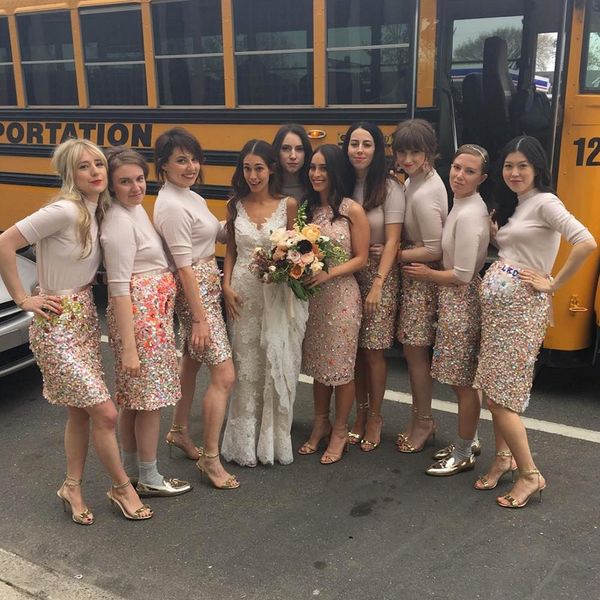 If you’ve ever been a bridesmaid more than once, you know all too well that it can easily end up feeling more like a chore than an honor. The expensive trips, the errand running… But the most common complaint of most bridesmaids? The dress. Whether it’s way out of your price range or totally not your style, being forced to pay for and wear a bad outfit can definitely leave a bitter taste in your mouth. However, that didn’t appear to be a problem at the wedding Lena Dunham was in this past weekend, because she and all the other bridesmaids wore PERSONALIZED J.CREW SKIRTS!

While acting as a bridesmaid in publicist Audrey Gelman’s Detroit wedding, Lena shared a couple of snaps on Instagram that left us feeling super inspired to plan that wedding we don’t actually have on the books yet. Lena captioned the photo above: “What happens when @jcrewgoddess Jenna Lyons lets a bunch of crazy bitches customize their skirts… here we go.”

The devil is in the details #bridesmaids #gomezandmorticia

Lena followed up with this closer look at each lady’s skirt, which has noticeably been customized with individual touches like lettered patches, extra flowers or, in Lena’s case, a tiny animal (no idea what animal that is TBH). The outfit appears to be topped off with gold shoes of their choice. Most went with a ’90s inspired heel, while Lena and one other bridesmaid opted for a loafers + socks combo.

Have you noticed any other fun ways to personalize bridesmaid looks? Share with us on Twitter @BritandCo.

Cortney Clift
Cortney is the senior writer and special projects editor at Brit + Co. She typically covers topics related to women's issues, politics, and lifestyle. When she's not buried behind her computer you'll find her exploring New York City or planning her next big adventure.
Style News
More From Style News