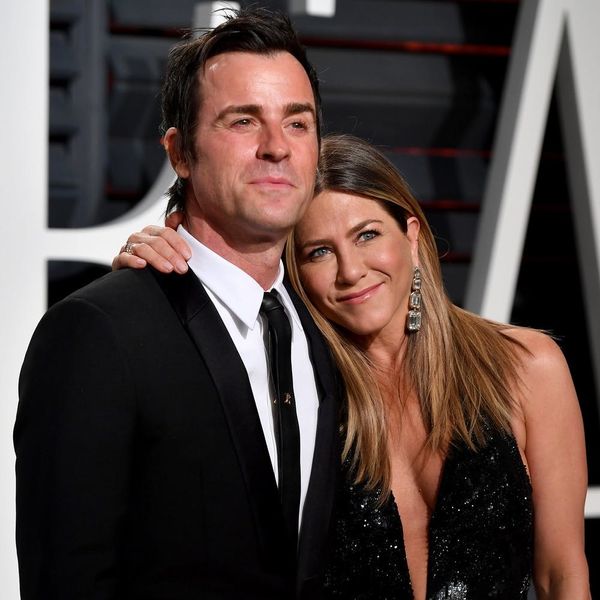 Jennifer Aniston and Justin Theroux rarely share details about their relationship — though the actor did let fans in on the fact that he skipped an audition for Friends back in the day. (Can you imagine?) But in a new interview for the October issue of Harper’s Bazaar, the actress opened up a little about her husband and their engagement and subsequent wedding.

Asked about how the Leftovers star popped the question on his birthday in 2012, Aniston replied with a very Rachel Green-like answer: “When Justin proposed, he put that freaking ring on my finger, and I was like, ‘Holy crap, now I’m gonna have to get manicures.'”

Introducing our October 2017 cover star, #JenniferAniston! In a no-holds-barred interview, funny woman, @amysedaris captures the quirkier side of everyone's favorite friend. Tap the link in our bio to see the feature. Photography by @marianovivanco Styling by @joannahillman Aniston wears @louisvuitton

The couple waited three years to tie the knot, but it was worth every minute. “Everything about that wedding was perfect. Everyone was dressed like a bunch of woodland creatures,” pal Amy Sedaris (who conducted the interview) quipped to Aniston.

“Justin asked me to be his best man two days before, and I was really scared,” the Unbreakable Kimmy Schmidt actress continued. “Jimmy Kimmel [who officiated at the nuptials] said, ‘Amy, you have one job: Just hand me the rings separately.’ Of course, I handed both to him.” Whoops!

As for Aniston, she has nothing but fond memories of that day back in 2015 when she pulled off a (seemingly impossible) secret wedding with her love. “It’s funny, I just gave Justin our edited video of the wedding for our anniversary, and it was fun to revisit it,” the 48-year-old Friends star shared.

"Vitamins. Vitamins. Vitamins. I take a lot of vitamins, I'm not going to lie. It changes all the time because someone will say, 'oh my god, you don't take activated charcoal?' Then you go down a Googling hole to understand the benefits of that, or tumeric or dandelion for water retention. Now I'm doing apple cider vinegar in the morning." #JenniferAniston talks health, ghosts and career in our October 2017 cover story, link in bio. Photography by @marianovivanco Styling by @joannahillman Aniston wears @dundasworld

Sedaris said that she was totally on board with the relationship right from the start, telling her friend, “When you guys started dating, I didn’t know you, but I was like, ‘I can see it, Justin. You don’t have to tell me anything about her.'”

We totally agree: We can see the love between them and have no doubt that these two will be together for years to come.

Do you love Jennifer Aniston and Justin Theroux as a couple? Let us know @BritandCo!

Desiree O
Desirée O is a ‘Professional Bohemian’ who loves anything and everything related to the arts, entertainment, and pop culture. She ADORES being a ‘Newsy’ for Brit + Co, covering all of the latest tidbits of awesomeness that you want to read about. When she’s not writing, she’s either making messy art, going on long adventurous walks with her camera, or poking around over at bohemianizm (http://www.bohemianizm.com/). You can find out about Desirée O and her work at http://DesireeO.com/ or follow her on Twitter @DesireeO.
Celebrities
Celebrity News
Celebrities Celebrity Couples