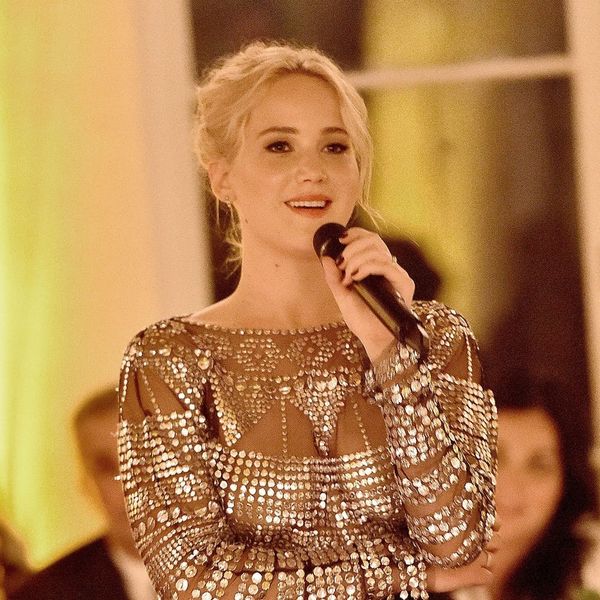 Fashion has always been a space for declaring how you feel inside and that isn’t changing with Jennifer Lawrence’s new campaign for Dior. The versatile actress, who’s now serving as a brand ambassador for the luxury designer, isn’t about to separate style and politics. In her latest print ad for Dior, Jennifer pairs jeans with a blazer. But it’s all about her shirt, which reads: “WE SHOULD ALL BE FEMINISTS.”

As one of Hollywood’s most vocal supporters of feminist issues—shutting down wage inequality, sexism and body shaming, all while proving female friendship equals power—Lawrence’s look is “on brand.” The phrase is a straight-up message of solidarity, as well as a hat tip to author/genius/life hero Chimamanda Ngozi Adichie—who originated the phrase as the title of her book-length essay and TED talk. Adichie, who has written brilliantly about fashion in the past, was right in the front row when Dior debuted the shirts at New York Fashion Week earlier this year. Did we mention another kickass woman designed the tee for Dior and chose the author’s quote? That’d be Rihanna.

Our muse Jennifer Lawrence is still maintaining her cool and relaxed allure ‎in her new campaign for Dior, while rocking the emblematic 'We Should All Be Feminists' T-shirt and the revamped studded 'Diorama' bag by ‎#MariaGraziaChiuri. © @BrigitteLacombe

While it’s worth being skeptical of corporate feminism, the tees aren’t just for Dior’s bottom line. A portion of the proceeds will be headed to the Clara Lionel Foundation, which Rihanna founded in order to “fight against injustice, inequality, and poverty” by providing equitable access to education and healthcare.

Still, the tee’s $710 price tag is pretty alarming. Dior has faced some justifiable backlash from the Internet, even with the charitable proceeds.

Criticism aside, it’s positive that fashion labels are preaching a message they’ll be held accountable for in practice. And it doesn’t hurt that J-Law and Rihanna, two hugely influential stars, are broadcasting that message on a global scale.

What do you think of Jennifer’s new campaign? Let us know @BritandCo!