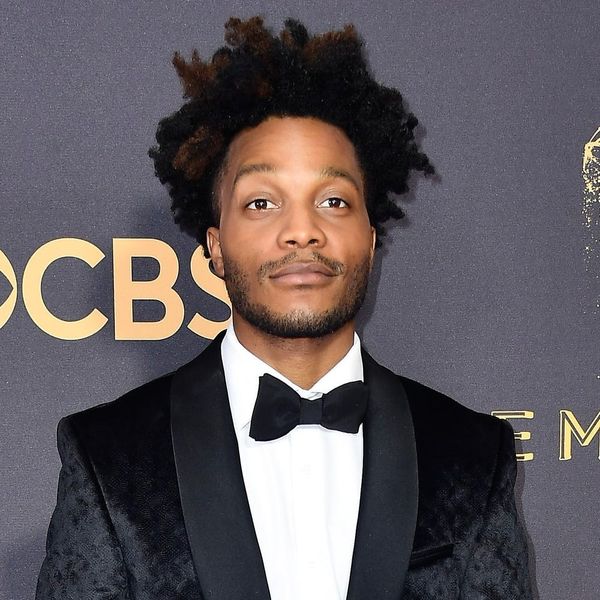 Some of the most memorable Emmys moments ever have come in the form of comedy. Stephen Colbert left his mark on the 2017 ceremony with his killer opening bit and monologue. And comedian Jermaine Fowler is making waves too, with his hilarious voiceover announcements.

Announcers are a staple of awards shows, often, well, announcing the presenters and calling winners to the stage to accept their awards. The voiceovers are typically scripted and formal, and the people behind the voices are kept out of sight. This year, CBS decided to switch things up by giving the gig to Fowler, the star of their sitcom Superior Donuts, and letting his personality shine.

“What most awards shows do is have the announcer locked in a closet reading from a script on cue,” Jack Sussman, CBS Entertainment EVP for music and live events, told Deadline. “What we will do is have Jermaine be an active part of the show. He will be connected with what’s happened on the telecast and what happens next. What we want to do is get a peek behind the curtain in a fun, engaging way.”

Fowler is, of course, reading from a script, but he’s also flexing his improv comedy skills and reacting to the show as it happens. He’s been audibly excited by some of the presenters and winners — “Get it, Laura Dern!” comes to mind — and when the camera pans to him, he’s clearly having fun.

Some people are loving the energy:

.@jermaineFOWLER's excitement while announcing Donald Glover's win for best director was all of us #EMMY2017

"Get it, Laura Dern." I'm here for @jermaineFOWLER as #Emmys announcer. pic.twitter.com/7lGwcGq6QH

#Emmys I #Love The #Announcer @JermaineFowler #JermaineFowler! #Hillarious! Now This Is #REAL #Diversity! Letting #People Be Who They Are!

Dear Jermaine Fowler,
Please do the voiceover announcements at every awards show. You deserve an Emmy tonight.
Love, Steve.#Emmys pic.twitter.com/SunXnrzmR8

But others aren’t wild about it:

um. this jermaine fowler fella is a bit too casual an announcer, don't you think? i liked his enthusiasm for issa rae tho. #emmys

Unfortunately, Jermaine Fowler will be there all night. Nails. Chalkboard. #Emmys

Not really sure what Jermaine Fowler is trying to give us with this Emmys announcing but I need about 60% less. pic.twitter.com/sD5LcU2rXR

Did @jermaineFOWLER just dial it back at #emmys ? 🙏🏼Thank you! Don't out show the show- appreciate you keeping it fresh 👍🏻and stay on point

This #Emmys is closed captioned by no one, the announcer will just scream everything for you. #earplugs @jermaineFOWLER

I feel good for Donald Glover but bad for Jermaine Fowler who is not going to know how his Emmy announcing went until it's too late.

Whether you like the switch or not, kudos to CBS for trying something new and shaking things up a little. Fowler shouldn’t be too worried about any haters, of course: The second season of Superior Donuts premieres on CBS on October 30, 2017.

What do you think of Jermaine Fowler as the Emmys 2017 announcer? Let us know @BritandCo!