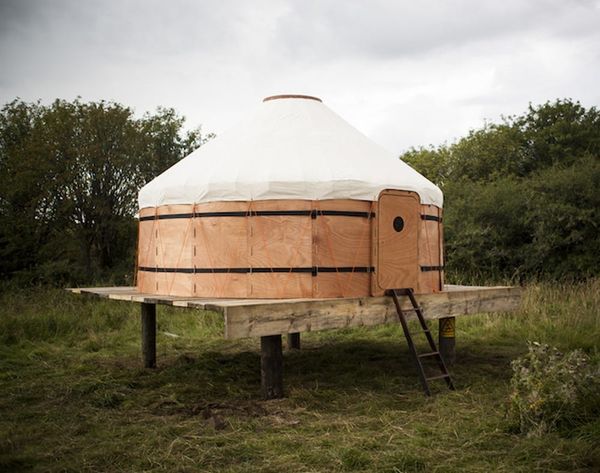 It’s easy to get behind technology that embraces age-old customs, which is why we think you’re going to love this project from the Scotland-based designers at Trakke. They’ve created the stunning Jero Portable Yurt, a handcrafted dwelling inspired by modern yurt design — and one that you can actually move without a semi-truck or a half-dozen camels.

If you’re not familiar, yurts have been used by the nomadic people in the steppes of Central Asia for centuries. Actually, at least 3,000 years… so many centuries. Starting in the 1960s, North America took notice and yurt-style huts were created in various parks as permanent structures where people can camp all year round. You can find these types of yurts scattered across Canada and the States (and they’re great for glamping, BTW).

For Trakke, that yurt-ish hut wasn’t enough. They wanted to create a comfortable, contemporary yurt that used today’s construction technology but stayed true to its nomadic roots. The team collaborated with adventurer/designer Uula Jero on the project, who actually lived in the prototype for a year after getting frustrated with materialism in society. The prototype was crude and light enough to haul with a bicycle, but the finished product is something that we’d be tempted to live inside forever.

The flat-pack design is lightweight and so compact it’ll fit inside your car. Yet, when its waterproof canvas, telescopic roof poles and removable door are fully set up it’s rather spacious. It takes about two hours to set up, but doesn’t require any special tools (only friends). And at around $8,000, it’s sounding like a pretty good deal compared with our rent.

In addition to the yurt, the company also sells some pretty drool-worthy outdoor gear that we’d like to wear inside the yurt.

Would you move into a yurt for a year? Let us know in the comments!