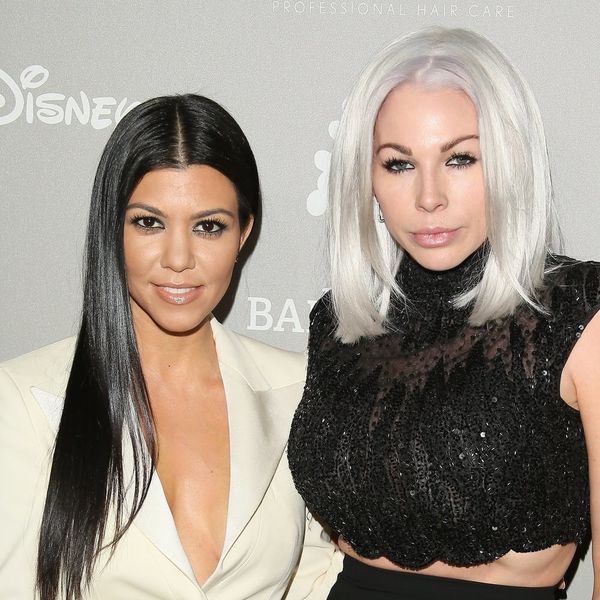 The Kardashians know A LOT about makeup (the youngest Kar-Jenner does run her own beauty company empire, after all), so when they trust someone to do it for them, you know they’ve gotta be talented. That honor goes to makeup artist Joyce Bonelli, who’s so good, in fact, that she says it’s her contouring and not plastic surgery that has given “Khloé a nose job for the past eight years.” Now, Bonelli’s got a few products of her own up her sleeve, and come Christmastime, she’ll be sharing them with you.

Bonelli has been steadily bringing us goods for some time now — you might recognize those insane leather lace-up pants Kourtney Kardashian donned to a Lakers game back in March from the Joyce Bonelli Shop ($1,100) — but it seems as though she’s now updated her social media handles to include (gasp!) “cosmetiques.”

But don’t expect an onslaught of goods from the beauty maven. As she told The Cut, “I’m not here to sell bullsh*t..It’s the best of the best. I’m not selling a thousand different things, it’s just a few things that I love. I’m excited. It’s really perfect.”

Those “things,” so far, include a brow-gel sample that Bonelli is currently testing at her manufacturer in Milan, Italy. “I’m into legit gluing them in place,” she confessed. Tint-seekers need not apply, however. “It’s clear in color; I’m not trying to add any shimmer or gold,” she said. “It lasts all day, so that when I touch my face and rub my brow, it’s still there. It doesn’t look like makeup, but just keeps it where it’s supposed to be.”

It’s a mantra that’s in line with Bonelli’s own makeup preferences: As she revealed to the outlet, she’s not particularly into trends such as, oh, say, watercolor eyes. “I do see the Instagrammers who are doing a full face with magenta, turquoise, and fuschia eye shadow,” she says. “Who does that? I’ve never seen anyone anywhere with that on their face. I’ve never gone to the grocery store and seen those colors on someone else.”

Instead, her line, which is due out in September or October (read: sometime before Christmas, if all goes according to plan), is more about tapping into one’s own natural beauty. “The basis is it’s about the ritual of beauty for a woman,” Bonelli shared. “It’s to bring out each person’s natural beauty and accentuate that.”

Are you pumped for Bonelli’s new line? Tell us over @BritandCo.

Nicole Briese
Nicole is the weekend editor for Brit + Co who loves bringing you all the latest buzz. When she's not busy typing away into the wee hours, you can usually find her canoodling with her fur babies, rooting around in a bookstore, or rocking out at a concert of some sort (Guns N' Roses forever!). Check out all her latest musings and past work at nicolebjean.com.
Beauty Products
Beauty News
Beauty Products Kardashians
More From Beauty News