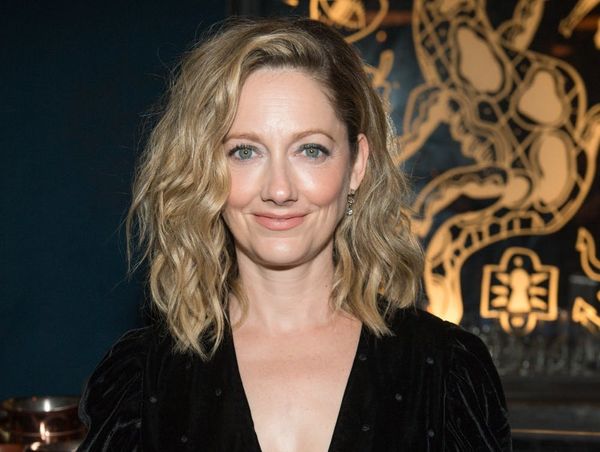 Judy Greer has been in everything, with everyone. So when it came time for her to cast her directorial debut, A Happening of Monumental Proportions, she had a lot of very famous friends who were eager to jump in front of the camera for her. Her film — a “day-in-the-life” ensemble dramedy about a group of parents, kids, teachers, and administrators at a school in LA — is overflowing with big-name stars, including Jennifer Garner, Allison Janney, Common, John Cho, Katie Holmes, Bradley Whitford, Anders Holm, Storm Reid, Rob Riggle, Keanu Reeves, and Kumail Nanjiani.

We caught up with Greer to chat about the incredible cast, her experience as a first-time director, and the best/strangest advice she received before taking on the project.

Brit + Co: What about this script and this story spoke to you?

Judy Greer: I love “a day-in-the-life” type of stories, and I love that it took place in Los Angeles but nobody is in the entertainment industry, because so many of my great friends just live here because they love Southern California but they don’t work in entertainment. I love the comedy, I love that the children are acting like adults, and the adults are acting like children. I love how people make bad decisions, and it’s sometimes funny but you still have to deal with it. I love the idea of mortality, and you never really know when your time is up, which is what I think the gardener kind of symbolizes for them. And I just love how funny it was.

B+C: This cast is amazing.

JG: I know! I feel like my cast sometimes overshadows my movie. I just couldn’t believe that so many people said yes to me. I started to get cocky, like, “Well, that person’s doing it, maybe this person will do it.” And then Kumail Nanjiani says yes, and I’m like, “Well, let’s ask John Cho,” and then John Cho says yes! I just couldn’t believe I was getting these incredible people.

B+C: Did you cast the movie in your head as you were reading the script?

JG: Yeah, you can’t help but do that. I made lists, but I had my first choices and everyone just kept saying yes, so I didn’t really ever have to refer to my list, which is so great. And I tried to ask people I knew, because they knew I wasn’t a crazy person, but also so I would feel more comfortable in this new beat.

B+C: How do you think your experience as an actor affected your directing style?

JG: I’ve been so lucky in my career as an actor to work with such great people. It was more like, “I hope I’m as good as some of the people I worked with at communicating what I want.” When you’re talking to anyone, you have to talk to them the way that they hear it. So I would say that having worked with directors, I knew what I liked from directors, but also, everyone’s different. So the trick is to figure out how people hear notes best or communicate best.

B+C: Did you seek out advice from any directors you admire before you started?

JG: Yes! I asked as many people as I ran into. Jason Reitman was so kind. I took him out for lunch and we talked for a really long time. I still have all these pages in my notebook of notes and ideas and advice from him. Anyone I ran into, I asked for help. Like, “Hey, tell me something — anything that’s going to make my process easier, better for my actors, better for my crew.” And people are awesome. Everyone was so supportive, very happy and excited for me. It was really nice. This business is difficult, but we want each other to succeed.

B+C: What was the best advice you got from anyone?

JG: I sat next to Adam McKay at a dinner for Lily Tomlin before I started my movie, and he was like, “Get a really comfortable pair of running shoes.” And I was like, “What?” Because that was not my directing outfit plan. I was going to wear my oxfords. So on the first day, I wore my oxfords and my feet were killing me, and on the drive home, I stopped and bought some Nikes. You’re just on your feet, running around, all the time. That was weird advice that maybe ended up being the best advice.

B+C: Was there anything about the process that surprised you?

JG: There were a few shots that we did that were challenging. Scheduling was challenging. And editing was harder than I thought it would be. There are just so many different directions you can go, and so many subtle changes you can make. It’s just a really interesting but also kind of scary process.

B+C: What advice would you give to other aspiring directors?

JG: Sit in an editing room for a while. Obviously, it’s important to be on set, but when you watch how movies get cut and pasted together, you really see the things that you have to make sure to get on the day. Because you don’t always have the ability to reshoot things. It’ll help you when you’re shooting to remember to grab a certain type of coverage or little shots here and there that can really be the connective tissue in your movie.

B+C: Do you have plans to direct more in the future?

JG: I hope so! I’d love to keep doing it. It was so challenging, in a good way. It expanded my brain, I felt so happy and energetic all the time — I really loved it. And I loved telling a story in that way.