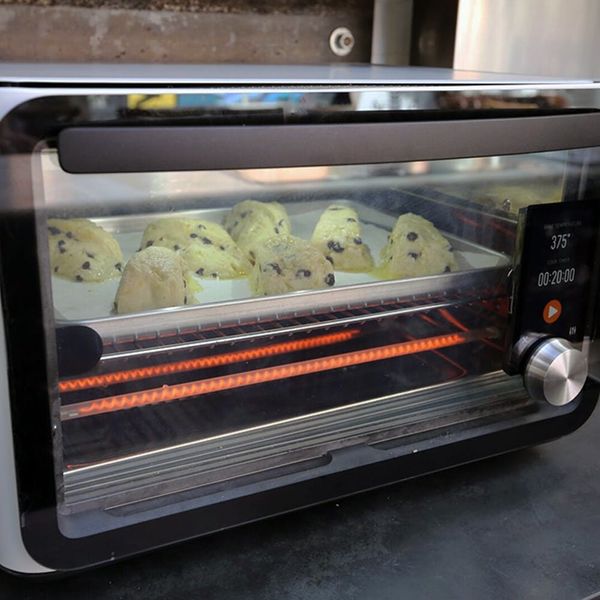 When you get invited to a free brunch, you more than likely clear your calendar and go. When you get invited to a brunch that is made with a smart oven, you disregard your calendar altogether, get up from your desk and book it to the event space. That’s essentially what happened when I opened my inbox to a brunch evite to test out recipes made with June Intelligent Oven (which you’ll be hearing more about at Re:Make this year — get tickets to Brit + Co’s big event here!). Here is what the latest smart kitchen appliance can cook up and how. Spoiler alert: The brunch was delicious.

For those of you that haven’t yet been acquainted with the June Intelligent Oven, here’s a quick rundown. June is a computer-based, app-connected countertop kitchen appliance that’s the epitome of a smart home product thanks to a built-in camera, touchscreen control panel providing more than a handful of capabilities, sensors and so much more packed into a device that’s big enough for a 12-pound bird or a 12-inch pizza. Whew, now that we got introductions out of the way, let’s get down to the business at hand: brunch. Isn’t that always what’s on the docket, though? It is in my mind.

After meeting June IRL and finding out what was on the menu prepared by the co’s newly appointed Research Chef Ryan Baker, it was time to dig into some oat granola, buttermilk scones, swiss chard + leek quiche and, last but not least, bacon. Each item was made from scratch by Chef Ryan (save the bacon, obvi) and then cooked to perfection by the June Intelligent Oven where Ryan could monitor the progress and change the temperature on the oven or through the June iOS app. Since June has sensors that can tell what is inside of it (it recognized when a bagel was placed on the rack, for example), you won’t need to be messing around with settings too much. If you do find yourself wanting to keep an eye on what’s cookin’, just open up the live feed camera on the app to get a gauge on that oven-baked meal. Bonus perk of the app: It’s loaded with plenty of Chef Ryan-created recipes that you can follow along with at home interactively once June is released in spring 2016.

Aside from all of the baked goods, bacon + accompanying mimosas, the coolest aspect had to do with the oven itself. In addition to all of the sensors and intuitiveness of the cooker, the most exciting part of it was the meat thermometer that hangs out inside June, allowing you to easily check to see if your meat is fully cooked without having to constantly take it out of the oven to check up on it. The fear of serving under- or overcooked meat is always the biggest fear of any dinner party cook. After completing a deliciously carb-filled brunch c/o June, I’ve got my fingers crossed for a dinner invite before the oven goes to the public next year.

See June in action at Re:Make this year!

What would you make with June? Will you be preordering a June Intelligent Oven? Share your thoughts in the comments.