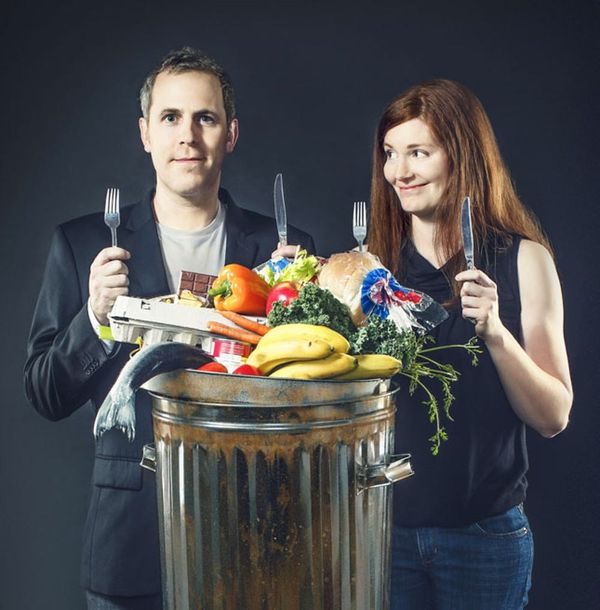 Fun fact: Food is delicious. Not-so-fun fact: 40 percent of food raised or grown in North America is never eaten, and yet one in six people in America still go hungry. It’s a strange disparity that so much edible food — billions of dollars’ worth on a yearly basis — is regularly tossed out, all while people are in desperate need of it in the US and abroad. It makes no sense, right?

After learning about the sheer amount of food that’s thrown away each year, Jen Rustemeyer and Grant Baldwin pledged to quit grocery shopping cold turkey and survive only on foods that would otherwise go to waste. “If that much food is being wasted,” they asked, “How much of it is still good, and can we eat it?”

What began as a personal project quickly turned into something much larger: a documentary that’s been receiving acclaim at film festivals and in the press. “I started coming across these numbers about how much is being wasted,” Jen says in the trailer, “and I just thought, ‘How is nobody talking about this?'”

Turns out those uneaten Thanksgiving leftovers aren’t even the tip of the iceberg. For one thing, supermarket beauty standards for produce are about as strict (and arbitrary) as those of the worst parts of the modeling industry. In other words, the tiniest thing that can be perceived as an aesthetic flaw renders a product “unsellable.” Likewise, expiration dates are a huge cause of food waste, especially since they have little to do with safety and everything to do with peak freshness.

At one point in the trailer, a food producer holds up an almost — but not quite — perfect piece of fruit. “This is edible, but it’s not edible to the supermarkets,” he explains. “As a grower, that’s heartbreaking. When you grow the fruit and you can’t sell it, that bothers me.”

So what else did Jen and Grant learn on their six-month food rescue mission, and what can be done about the issue of waste? Find out in their film, Just Eat It: A Food Waste Story, which is now available on iTunes and viewable at screenings around the country.

How do you cut down on food waste? Let us know in the comments below!

Amy Lynch
Amy is a freelance writer and editor, telling the stories of progressive people and projects that move the world forward. Her work has appeared on The Hairpin, Refinery29, Citygram and more, and she's developed content for the likes of Alternative Apparel, Milkshake and Silvercar. She lives, works and plays with her fiancé and their dog, Bogey, in the weird, wild heart of Austin, Texas.
Food
The Conversation
Reviews:
More From Food