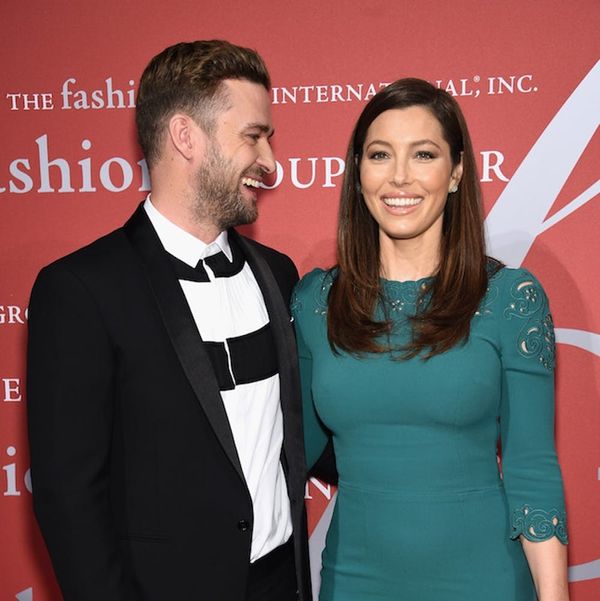 1. Justin Timberlake wins the cute husband award this week. Jessica Biel celebrated her 34th birthday yesterday, and Justin posted an adorable photo of his scruffy-bearded self giving her a big smooch on the cheek along with a caption thanking her for all she does as his wife and mother to their son. “Happy BAE-DAY, baby!!” he wrote. “I can’t put into words what you mean to me… You are the GREATEST Mommy and Wife a man could ever ask for. I love you to the MOON AND BACK!!! — Your Huz.” Um so like, it’s cool if we just start calling him Huz now, right? Okay. Good.

2. Lady Gaga got matching tattoos with the sexual assault survivors who joined her on stage at the Oscars. We were not equipped for this level of heavy this morning. Prior to Lady Gaga’s performance of “Til It Happens To You” at the Oscars, which saw her share the stage with real-life sexual assault survivors, Gaga spent hours with them, learning their stories, and says they made a pact. Now, they’ve cemented their monumental moment together with matching tattoos — a symbol of unity, expressing solidarity with sexual assault survivors, tattoo artist David Allen at Pioneer Tattoo in Chicago explained on Instagram. Many of the survivors shared their new ink on Twitter and Instagram. “She spent a great deal of time with the survivors throughout the rehearsal process, and they formed a unique and meaningful bond,” The Hunting Ground producer Amy Ziering previously told People. “Many of them told me that speaking with her and hearing her share her story and what she’d learned was healing and life-changing.” (h/t People)

3. Beyoncé’s new behind-the-scenes Super Bowl pictures are everything. We’re still not over the powerful performance Bey gave at the Super Bowl — and she KNOWS it, keeping us drooling with a set of new behind-the-scenes photos from the day. Many of them include Blue Ivy in the adorable tutu we assume she insisted on wearing to rehearsals with her mom, which looked extra perfect when Coldplay’s Chris Martin twirled her around. What else are tutus for?! Bey and her crew share a shot in one snap too, which, like — same. Check out all the amazing photos on Bey’s website.

4. Parents going undercover to trick their kids into telling the truth is the video you NEED to see today. One of Youtube’s most famous makeup transformers, Promise Phan, worked with Field Day to transform moms into hipster men, dads into marm-y moms, and more. They put the disguised parents in front of their children — and a camera — to see how these kids really feel about their parents. The results? HILARIOUS. These kids dropped major truth bombs, like calling their parents out for cursing, breaking the fridge door and — the kicker — admitting that their dad was so hairy, they believed him to be a werewolf.

5. May we all be this kid dancing in the street like Michael Jackson. In Dartmouth, Nova Scotia, a pair of friends were driving to the store when they spotted something weird — and amazing. “All of a sudden I heard my friend laughing and I looked over and we saw him,” Mitch Owen told BuzzFeed Canada. There he was, a kid giving it his all without a care in the world. On the way back, he was still there. “We gave him a beep and he waved. He truly did look like he was having the time of his life.” AS WE ALL SHOULD. (h/t Buzzfeed Canada)

6. Quote of the Day: “Accused of lip synching last night, which is the nicest thing anyone has ever said to me cuz I’m a sketch singer sometimes. It’s live tho.” — Grimes